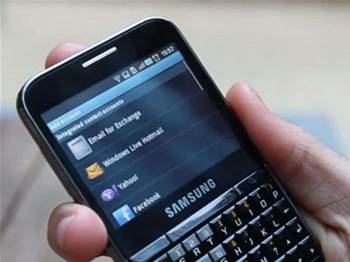 Samsung is looking to take a slice from RIM's BlackBerry pie with the introduction of a business-centric Android smartphone complete with Qwerty keyboard.

The Samsung Galaxy Pro is aimed at people who prefer typing via physical keys – the landscape keyboard will look very familiar to BlackBerry or Nokia E71 users – although the handset also features a 2.8in capacitive touchscreen for navigating apps and settings.

The similarity with BlackBerry handsets is striking, and experts believe the handset could mark Samsung's attempt to win business users.

“It looks like it could be part of a move into the enterprise arena,” said CCS Insight analyst Paulo Pescatore.

According to a sneak peak video offered by 3 – which said it would begin selling the handset from next month – the Galaxy Pro also attempts to address another problem with Android smartphones, that of battery life.

The company said Samsung's Social Hub Premium app amalgamated messaging, email and social media into one, which means there is less draw on the battery because there are fewer apps running at once.

The handset's specs also include an 800MHz processor, a 3-megapixel auto-focus camera, and Android Froyo 2.2.

Got a news tip for our journalists? Share it with us anonymously here.
Copyright © Alphr, Dennis Publishing
Tags:
businessgalaxyhardwareprosamsungtargetswith