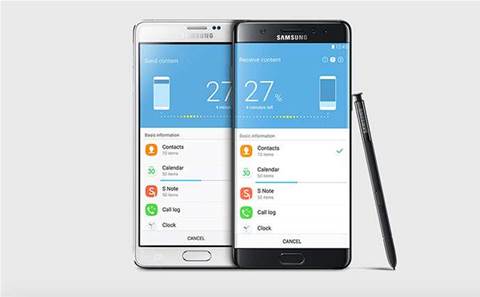 Less than three weeks after device was recalled.

Samsung has confirmed that replacement stock for its Galaxy Note7 smartphone will land in Australia on 21 September, three weeks after the device was withdrawn over a fire risk.

Reports of the Note 7's "isolated battery cell issues" first came to light on 2 September, followed by a full-scale Australian withdrawal on 5 September.

The fire risks forced Samsung Australia and its local resellers to cease sales of the highly anticipated device and recall more than 50,000 phones. At the time, Samsung expected replacement devices to start shipping in three to four weeks.

“We would like to thank our loyal customers for their patience, and apologise for the inconvenience," Richard Fink, vice president IT and mobile at Samsung Electronics Australia, said in a statement.

“Our number one priority is the safety of our customers, which is why we’ve worked hard to provide new replacement Note7 devices as quickly as possible.

"We appreciate our customers’ continued support as we start to deliver this new stock to operators and retailers around the country from September 21." Fink joined Samsung last month after a career spanning Coles and Telstra.

Customers are entitled to a courtesy device until they can get their hands on replacement Note7.

Those with an affected device are reminded to back up their data, complete a factory reset to delete personal information, turn the device off and return it to the place of purchase.

Galaxy Note 7 users have been warned by the US Federal Aviation Authority to leave the devices turned off and not charge them while on board planes.

Passengers must also not stow the devices in any checked-in luggage, the FAA said.

Qantas, Virgin Australia, Emirates, Etihad Airways, and Singapore Airlines have all temporarily banned the use of Samsung Galaxy Note 7 devices on their flights.

Got a news tip for our journalists? Share it with us anonymously here.
Copyright © CRN Australia. All rights reserved.
Tags:
galaxy note 7 hardware samsung