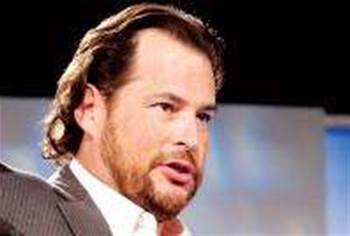 Protests in Egypt in January were reportedly organised on Facebook. Protesters were photographed with signs that thanked the social network.

“This social revolution is really unlike anything we’ve experienced. We’ve seen the fall of countries, the fall of dictators.

“When will the first corporate CEO fall for the same reason, because [their] customers are standing up and are tired of not being listened to?”

Benioff said Salesforce had been “reborn social” after launching as a cloud company in 1998.

In the past year, the company introduced 150 new features to its enterprise social networking platform, Chatter, which launched in November 2009.

It improved Chatter’s integration with Facebook, Twitter and subsidiary Jigsaw – which was rebranded Data.com – to populate customer and employee records with more personal information.

Salesforce.com also launched a hybrid version of cloud database service Database.com and a device-agnostic mobile application that was built on HTML5.

Benioff acknowledged that Salesforce had talked about its social network-driven ‘Cloud 2’ vision for some time but said the company was still grappling with the challenge of bridging the gap between consumer and enterprise IT.

“We’re born cloud in 1999, but we have been reborn social,” he sad. “What is so exciting about our industry is that it’s always changing.”