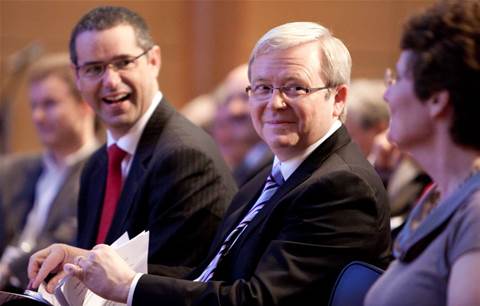 Broadband Future Forum hears of 18 plans abandoned over past 12 years.

Kevin Rudd has told the Federal Government’s broadband future forum in Sydney that it was time to “stop the rot” and take action on broadband after revealing 18 plans were created to fix the problems in the past 12 years.

"The reality is that Australia's current broadband infrastructure is not up to scratch," the Prime Minister said.

"Slow broadband is holding our nation back. We've got to change that."

He reiterated global statistics he said put Australia behind "Turkey, even the Slovak Republic" on high-speed internet access.

And he said Australia was "in the bottom half of OECD rankings for broadband take-up".

"Before we came to office, there had been 18 plans released [to fix the issue] in 12 years while Australia still fell behind," Rudd said.

Earlier, Communications Minister Stephen Conroy told industry delegates they were "uniquely positioned" to make sure all Australians benefited from the up to $43 billion National Broadband Network investment.

He told the industry "we must work together to develop plans and strategies... and business models to support future digital growth".