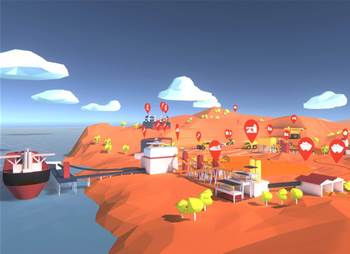 Rio Tinto has created a virtual reality representation of its mines and remote operations centre in Perth that is being used as a recruitment tool by the miner.

The virtual reality app was created by Viewport, a Perth-based VR/AR studio, and is being distributed via the Oculus store, though it is not publicly viewable.

Viewport said in a blog post that the app “was developed over a period of three months ... and is now being used all around the world by Rio Tinto.”

App users find themselves in “the middle of a vibrant, scaled down mine site.”

“The user looks around in virtual reality using their gaze to trigger the desired video file through numerous icons placed within the environment,” the developer said.

“Viewport custom-built a variety of vehicles likely to be found on a typical mine site including dump trucks, an ore hauling train and support vehicles.”

The company said it shot videos used in the app “on location at Rio Tinto sites located at Paraburdoo, Karratha and the Rio Tinto Operations Centre in Perth”.

“Filming at Rio Tinto locations such as Paraburdoo and Karratha has its challenges, 12 hour long shoots, red dust constantly threatening to coat and clog the equipment and blistering heat,” it said.

Viewport also produced a publicly-viewable walkthrough of the app, and said that more content would be added to it in 2020.

It also said that the way the sites had been filmed enabled the app users to “sense the scale” of machinery operating at the mines.