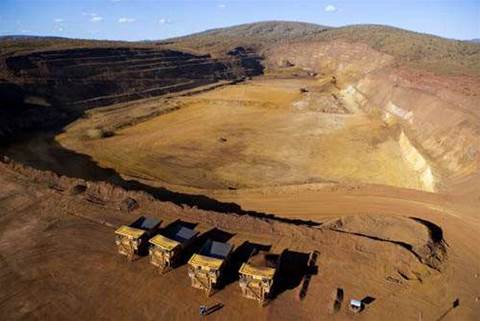 Rio Tinto has found an extra seven million tonnes a year in iron ore capacity within its existing Pilbara operations courtesy of the "deep system visibility" delivered by investments in IT, automation and remote control.

The mine giant expects additional capacity and production improvements that are directly attributable to technology investments to flow from its substantial Mine of the Future program, iron ore chief Sam Walsh told an investor day in Sydney yesterday.

"Benefits that technology and automation bring are beginning to accrue across our costs, the way we manage increasing business complexity, and in anticipating optimisation opportunities," Walsh said.

The rise in 'nameplate capacity' — the rate of intended production — in the Pilbara from 230 million tonnes per annum (mt/a) to 237 mt/a was a centrepiece for investor day discussion.

"This is due to productivity improvements alone, with the [remote] operations centre and related planning and coordination work enabling a real time optimisation of the fully integrated system," Walsh said.

"Since the delivery of 220 mt/a capacity in late 2008, no new major infrastructure has been added.

"Increases to 230 mt/a have been achieved by low-cost system de-bottlenecking, and now a further 7 mt/a capacity is added through, for example, changes to maintenance strategies, port stockpiling, ship and rail scheduling, and operational improvements."

Walsh noted that while technology and automation are "key value drivers", Rio Tinto's real "competitive point of difference is our understanding of the related management systems, the analytics, the system modelling, and most importantly the cultural change required".

"Frankly our competitors have not perhaps realised this yet," he warned. "This is not something that will happen with a click of their fingers.

"It hasn't occurred overnight and it certainly won't for others who are following us down this path."

Production up, labour costs down

One of the costs that Rio Tinto expects to keep a lid on through its technology investments is labour, effectively increasing production without a proportional rise in employee costs.

"It's clear that our key technology-related projects will provide a structural response to costs escalation by ensuring that our labour resources do not grow in proportion to our increased tonnage movements," Walsh said.

"For example, between now and 2017 we'll need to recruit 16 percent fewer people to the business, or about 900 new starters."

Rio Tinto has previously talked up the significant savings possible by reducing the number of personnel required to work from the Pilbara, where house prices can top $1 million.

"With lots of new information and the capacity to analyse and act on it, we're more easily seeing the bottlenecks ahead of them occurring," he said.

Walsh said Rio Tinto "continuously" sweated bottlenecks, noting that they were unavoidable in integrated mine environments, "no matter how optimally" they were configured.

"Presently, the mines are operating at record levels and the constraint is in the rail," he said.

"Yes, we'll fix that bottleneck but there is some upside there as it's allowing us to stockpile at the mines to assist with filling future capacity expansions."

Walsh expected to further re-rate Pilbara nameplate capacity as a result of the technology investments.

"The ops centre and related planning and coordination work will continue to provide a deep, fully integrated, real time view of the total system, over and above the present 7 mt/a of capacity we've already found," he said.

Rio Tinto is currently involved in a five-year, US$15 billion ($14.3 billion) iron ore expansion project that will boost nameplate capacity to 353 mt/a by 2015.

The extra 7 mt/a increase today isn't included in the expansion figures. The firm noted today that "this increases the capacity of the expansion program from 353 mt/a to 360 mt/a." (pdf)

At a reciprocal investor day held in London last month, Rio Tinto also attributed optimisation of its truck fleet and maintenance savings to its technology spending.

The Mine of the Future programme is bringing automated trucks, drills and trains to iron ore mines in the Pilbara, which can be centrally controlled from a remote operations centre in Perth.