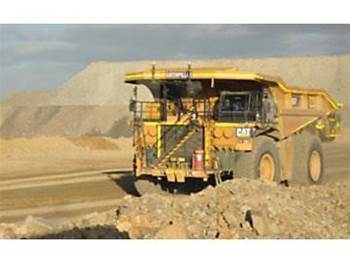 Rio Tinto has placed orders for autonomous trucks and drills for its forthcoming $2.6 billion “intelligent mine” Koodaideri.

The miner said today that it will buy “a fleet of 20 autonomous 793F trucks as well as four autonomous blast drills” from Caterpillar and the heavy equipment maker’s Western Australian dealer WesTrac.

Rio Tinto said Koodaideri will be the “first Pilbara mine to be primarily operated using Caterpillar machinery.”

“The two companies have also agreed to study the potential for increased levels of automation of heavy mining equipment at the mine in the future,” the miner said.

Koodaideri is also a first for Rio Tinto in that it is the first mine to be developed under a strategy unveiled in the middle of last year.

The miner is hoping to create a series of intelligent mines in which all assets are networked together and capable of making decisions themselves in microseconds.

"Technology is rapidly changing our mining operations as we harness innovation to make our operations safer, smarter and more productive,” Salisbury said.

“This extension of our partnership with Caterpillar and WesTrac represents an exciting step for our business.”

Salisbury added that while the development and adoption of technology “will continue to change the way we work ... we remain committed to providing opportunities for new roles, new skills, redeployment and retraining.”

Koodaideri is located around 35 kilometres north-west of Rio Tinto’s Yandicoogina mine site. It is expected to commence by the end of 2021.

It will be the first mine in Rio Tinto’s portfolio to have a digital twin of its processing plant, essentially a fully-working digital replica of the physical site that will help the miner test and understand the impact of changes before actually doing anything at the site.

The digital twin will be field-accessible by mine workers. It is being worked on by Rio Tinto and its engineering, procurement and construction management partner for the project, Worley.

Koodaideri is also expected to host an automated workshop and “numerous data analytics capabilities and control loops to optimise production and reduce downtime.”