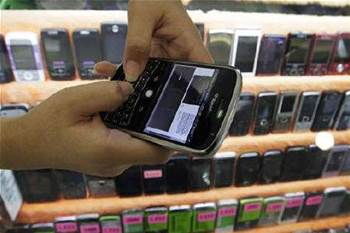 The mood is grim in Thirsty's, the tiny blue-collar pub across from Research In Motion's low-rise block of manufacturing buildings.

Barmaid Debbie said a trio of workers came in Monday afternoon to drown their sorrows, among the first to pay the price as the BlackBerry maker trims fat to better compete with larger rivals spitting out more popular devices.

Yet in a gastro-bar a few blocks east, where white-collar RIM staff meet daily, owner Jody Palubiski shrugs off concern that RIM's belt-tightening will hurt his sales.

"As much as RIM helps add to my business, whether my business is going to survive is up to me and how dedicated I am," he said from a booth at the back of Wildcraft.

Two hundred RIM factory workers got marching orders on Monday, according to local media reports and residents. Others have lost jobs just outside Toronto, said an ex-employee still in touch with former colleagues.

RIM declined comment on the depth of the cull beyond what co-chiefs Mike Lazaridis and Jim Balsillie said on an earnings call last Thursday. They are the first job cuts at RIM for almost a decade, reflecting the tougher competition and a stock price that's sagged to 5-year lows.

But business and civic leaders in the region say the tech ecosystem RIM helped to build is resilient enough to withstand a period of reflection at the company.

RIM's BlackBerry was long the benchmark for a security conscious business world.

But investors and shareholders are fast losing patience as the company slips from smartphone dominance to an also-ran spot behind Apple's iconic iPhone and a clutch of competitors using Google's Android software.

Employees complain that a bulging ring of middle managers fight turf wars and ignore strategic needs. Pay levels have stagnated, and the pool of those eligible for stock options appears narrower than it was before.

"There is always a fall guy, and it's somehow not management," a self-described veteran employee wrote on an online forum on Tuesday. "I have gone from being so proud of this company, to completely disillusioned."

RIM has switched component suppliers twice in the last year, leading to delays getting new devices to market, and its PlayBook tablet faced scathing reviews when launched in April.

Still, Waterloo, a university city 90 minutes by train from Toronto, is giving RIM the benefit of the doubt.

"There are folks out there who think the sky is falling. I don't think that is the prevailing sentiment here," said Avvey Peters, vice-president of operations at Communitech, which mentors startups and hosts Google's Canadian hub in a refurbished tannery building in next-door Kitchener.

"People have confidence in RIM and yes, it's going through some changes, but I don't think there is panic by any means."

RIM employs about a third of the 30,000 people working in tech firms in the region of just over half a million people, and cuts there may even help others pick up talent.

"As long as it's not excessive in terms of numbers, in some ways it's quite healthy," said Gerry Remers, the chief operating officer of projector company Christie Digital.

"To some extent people are letting out a sigh of relief. They were sucking all the air out of the ecosystem here."

Waterloo is grateful to RIM's leaders for more than jobs and tax receipts. Co-founder Lazaridis built a theoretical physics institute at his alma mater, the University of Waterloo, and his businessman sidekick Balsillie has added a centre dedicated to international governance.

But the best and brightest don't stay in town seeking a job at RIM, according to student Jamie Murai, who critiqued RIM's developer relations in a widely read blog earlier this year and now develops software for Apple's platform.

"Google moving into Waterloo may have been the first time RIM had to worry about local labor mobility," he said.

Google arrived a few years ago after buying local startup Reqwireless. It recently bought another, PostRank, and boasts 150 employees in its focal point for growth in Canada.

Other tech residents are growing too. Corporate software company Open Text is making room for an eventual doubling of its workforce to around 1,500.

Christie Digital, whose display technology shows up in CNN's election coverage and the Nasdaq trading wall, has 225 manufacturing workers in the region, up from 120 a year ago.

"The community has confidence in RIM, it's a strong company with a strong balance sheet," Communitech's Peters said. "But if there are changes on a larger scale, Waterloo reinvents."