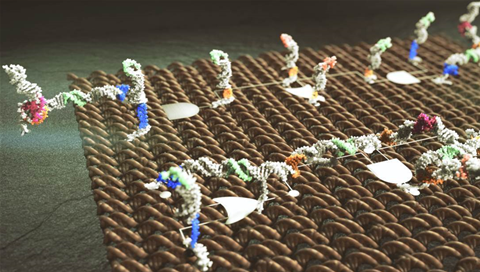 Researchers from Microsoft and the University of Washington have created nanoscale computational circuit boards using DNA molecules, laying the foundation for biological computing.

Their paper outlines how to create logic gates, the building blocks of computational circuits, "by spatially arranging reactive DNA hairpins on a DNA origami" - arranging DNA molecules at regular intervals on a DNA surface.

The transmission of information takes place when the molecules interact with their immediate neighbours in a domino tile effect.

The researchers were able to create elementary logical AND, OR gates, and more complex XNOR circuits by spatially arranging DNA molecules.

This is a new approach from past attempts at using DNA for computing, which were designed to operate in a chemical soup, where DNA molecules rely on random diffusion to bump into each other in order to perform computational steps.

This makes for a relatively slow process compared to organising the DNA molecules close to each other so they can perform computations through a domino effect, the researchers said.

The researchers believe biological, molecule-level computer could have real world applications such as in-vitro detection of pathogens, biomanufacturing of materials, smart therapeutics, and high-precision imaging.