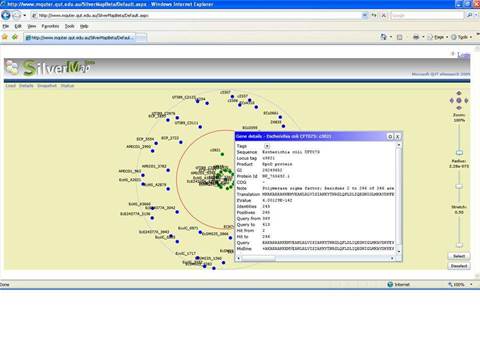 Silverlight tools that help researchers make sense of complex genome data and patterns are being included in the advanced bioinformatics syllabus at the Queensland University of Technology.

The tools have been developed out of the Microsoft QUT eResearch Centre, a $2.7 million joint venture funded by Microsoft Research and the Queensland State Government.

One of the tools, Silvergene, is a genomic visualiser designed to replace existing genome browsers.

Associate Professor of Computer Science at QUT, James Hogan, told iTnews that it had been designed "to understand the relationship among collections of genes and proteins" and to navigate between the views in a different way.

"When researchers want to navigate from a genome view down to a specific base view, the principal problem with a lot of traditional genome viewersis they can't scale between the views fast enough," Hogan said.

This is because the visualisation is typically rendered at the server before being sent to the researcher's desktop.

By using Microsoft Silverlight - a rich browser plug-in - Hogan said QUT had been able to enable the image processing to occur at the desktop level rather than the server.

"We can generate using Silverlight on-the-fly at the desktop," Hogan said.

Hogan said that Silvergene is being used in QUT labs and by University biologists in the United States.

QUT is also in discussions with UK researchers for a genome-wide disease studies application of the technology.

Hogan said the Centre has also developed an application that brings map navigation to genomics called Silvermap, and a set of bioinformatics analysis ‘blocks' based on Microsoft's Popfly technology.

He said that both Silvergene and the biomashups tools had been trialled in QUT laboratory classes, primarily with second and third-year students.

"Basically I think it's important to see them as very valuable tools within the context of the [bioinformatics] syllabus," Hogan said.

He also said the code would soon be opened up to the public via Microsoft's Codeplex website.

"We'll shortly be pushing Silvergene out to Codeplex as an open source project," Hogan said.

"We're just cleaning up the Silvermap code at the moment and will probably take it out to Codeplex within a month or so."

Hogan said part of the conditions of receiving funding from Microsoft Research was that the developments be "pushed out to the research community."

But he said the University wasn't tied to releasing through Codeplex.

"We're not required to release it through Codeplex - it's more that it was the suggested spot," he said.

"We could equally do it at Sourceforge. I don't think it's a particular drama.

"I think people will get wind of it from our demo sites and then go hunting for the code."