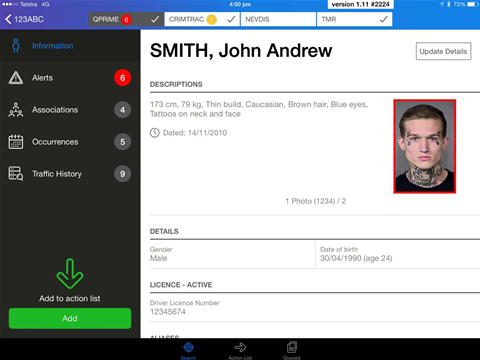 A mock-up of the QLiTE application (Source: QPS)

The Queensland Police Service has introduced new features to its tablet application that are expected to cut police radio congestion by as much as 80 percent.

The force recently upgraded its in-house built QLiTE app - designed for some 5000 tablet devices carried by the state’s police officers - with a function it is calling “QTasks”.

QTasks is a dispatch management tool for non-critical calls for assistance that will allow officers to view and map jobs by location and severity. It allows frontline police to receive and review call-outs previously only available via radio, and decide who is best placed to respond based on location and operational capability.

Acting assistant commissioner Bruce McNab said the tool would reduce congestion on police radio by up to 80 percent, and free up the voice network for critical communications.

“QTasks also enables frontline officers, supervisors and police communication QCAD centres to see where incidents are occurring and the location of police resources on a map," police minister Bill Byrne said in a statement.

“This functionality will significantly improve situational awareness, officer safety and the QPS’ ability to appropriately respond to all calls for service."

QTasks will be piloted amongst officers in the Capricornia district of central coastal Queensland before it is rolled out incrementally across the state over the coming year.

The QPS was the first Australian police force to jump on the opportunities provided by mobility back in 2013, and has now rolled out around 5000 devices to frontline officers.

The award-winning QLiTE application has already been modified over time to stream CCTV footage, issue traffic infringement notices, and was rewritten as a native iOS app to integrate better with device features.

The foundational functionality of the software enables officers to enter incident reports and details directly into the central QPrime database from the field.