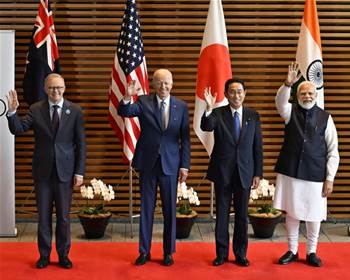 5G standards also on the table.

International cooperation over cyber security and telecommunications standards will be boosted after this week’s Quad conference in Tokyo.

The White House has released a communique from the four-country leadership meeting, the first official duty of newly-elected prime minister Anthony Albanese.

Action on cyber security is to include strengthened information sharing between the four countries' Computer Emergency Response Teams (CERT), “including exchanges on lessons learned and best practices”, the communique stated.

There will also be a “cyber security day” campaign drawing on the resources of the Quad partners, academia, industry, non-profits and communities.

The campaign will provide “basic cybersecurity information and training to the most vulnerable … including schoolchildren, small businesses, and the elderly”.

As well as cyber security, the Quad communique promises greater attention will be given to “critical and emerging technologies”.

The group announced a “Common Statement of Principles on Critical Technology Supply Chains” has been launched, but not yet published.

This will “provide a cooperative foundation for enhancing supply-chain resilience in the region”, the statement said.

The Quad announced a “Memorandum of Cooperation on 5G Supplier Diversification and Open RAN”, under which members will “cooperate on technical exchanges and testbed activity to advance interoperability and telecommunications cyber security.”

The group also announced it will launch an International Standards Cooperation Network, in which “like-minded allies and partners” will share information on technical standards activities.

In what appears to be an effort to counter China’s influence in telecommunications standards, one aim of the network will be to give Quad members increased “influence in international critical and emerging technologies standards.”