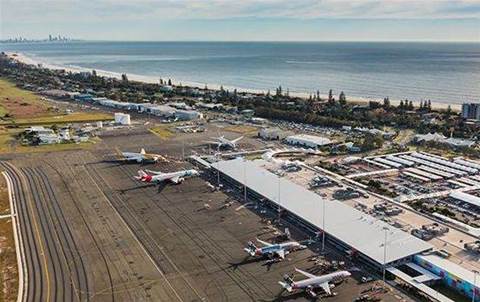 Queensland Airports is rethinking its future need for data centre space after a two-year shift into the cloud, with several options emerging to create value from its existing assets.

The company - which operates the Gold Coast, Townsville, Mt Isa and Longreach airports - is looking at ways to repurpose its existing data centre.

But it is also trying to find new uses for its extensive land holdings, which are serviced by high-voltage feeds and multiple telecommunications links - infrastructure that third-party data centre operators might find attractive.

“An airport has two things: a lot of people walking through it and plenty of land,” general manager of technology and innovation Beau Tydd said.

“From an airport perspective I’ve got a problem. Within the airport itself if I’m using comms rooms or data centres, I’m taking up extremely valuable retail space.

“We are building a new terminal on the southern end of the Gold Coast, roughly about $340m, and they are trying to squeeze our room smaller and smaller because we don’t need the space as much.

“What I need to be able to do is look at the value of those comms rooms and try and find a different way to create value.

“In addition, every airport is a land hub within that region. We have our own high voltage network and we have all the comms coming through the site so it makes it a lot easier to run a data centre. So the other thing that we can look to do is build a [third-party] data centre on other bits of land that we have.”

Speaking at Adapt’s Cloud & DC Edge 2018 conference, which is co-organised by iTnews, Tydd said the company’s own need for data centre space shrank from 22 full racks down to eight in just two years.

The reduced need for data centre space comes after a major push into public and private cloud.

“In the last two years we’ve moved about 80 percent of our corporate systems and about 30 percent of operational systems into the cloud. That’s left a big gap in the data centres.”

While its requirements for physical space are down, the airport operator is still running data centre plant for a load that no longer exists.

“In my main data centre, I’ve got two 30kVA UPSs that are about seven-to-eight years old, I’ve got massive cooling systems that are underused, and my distribution rooms don’t have the same heat they used to have.

“I’ve got to rethink what the main purpose of these data centres are.”

The company already shares its data centre space with retail tenants as well as government agencies.

“We have probably 80-90 different tenants that use our equipment in our racks and our network,” Tydd said. “We also have secure racks for Immigration and Border Force.”

One possibility being explored is to open the data centre to other businesses in the region, essentially running it as a colocation site.

“I already have my tenants that are in that terminal and in the precinct coming in and using it - what about bringing in other tenants in the region to use that as a data centre?” Tydd said.

“The data centre can be an economic driver in these regions. That’s some of the thinking that we’re going through now.”

Another possibility would be to rethink what a data centre or comms room at the airport looks like, which could include the adoption of moving into enclosed, modular environments.

However, Tydd said the firm had "looked at if we took everything out and started from scratch how would we do it, and it’s not a cheap exercise and the return is not there".

“So if I can’t get a return from changing what I’ve got, how do I reutilise it,” he said.

While its own data centre needs might be shrinking, the company is considering hosting other data centre operators on its land.

Nearby Brisbane Airport pioneered that operating model back in 2010, when it allowed iSeek to build a data centre on its land holdings.

“Data centres to me are an economic [growth opportunity]. If we can build a data centre or partner with someone who can build and run a data centre, the industry will grow around it," Tydd said.

Queensland Airports has examined what it needs to run on-premises versus what it could push into the cloud.

“There is a percentage of systems that we’ll keep on-premises -  for example, some of the operational technology we need to keep on-premises, but we’ll back it up to the cloud,” Tydd said.

“Whether it’s building management, CCTV, checking controls etc. we’ll always have some things running on-premises, but it’s not going to be at the scale that it used to be, because we’re removing that need.”

The company is using Megaport to connect its corporate network into a range of public cloud services.

It has shifted to Office 365 and is running a multi-cloud setup that includes AWS and Azure, and is likely to also expand to Google’s cloud products.

Eighteen months ago, Queensland Airports issued a challenge to universities and private firms alike: come in, use airport data and demonstrate the value of various applications of video analytics.

“We have a huge amount of CCTV coverage - what can we do differently, how can we leverage video analytics?” Tydd said.

“We had 28 organisations come and run trials on-prem, and we ran it as a partnership with every organisation that wanted to try something.

“The rationale behind that was if we don’t help we’re going to get a product that needs to be manipulated anyway.”

Tydd is keen to take the model and apply it to the internet of things (IoT). He’s already working with an unnamed Gold Coast company on intelligent lighting with embedded sensors for ambient measurement as well as access control.

“I can test it out in my [data centre and comms] rooms and actually put it all the way across the airport [if it works],” Tydd said.

“We’re using my comms rooms as a testbed for the rest of the airport.”

Additional IoT use cases could also come out of running a similar challenge to the video analytics one.

“IoT has got massive potential in the future and I don’t think we’re touching it yet,” Tydd said.

“But that’s where I think the airport has a real advantage to go to universities or industry and say let’s test this out.

“I want the universities to use the airports as a trial ecosystem, as long as it doesn’t affect operational capabilities. Trial things, go and see what works and what doesn’t.”

Tydd is keen on university and industry collaboration not just to benefit his own organisation, but also to help grow the IT industry in areas he has operations.

“I’ve got a responsibility to the community,” he said.

“If I can’t build an IT hub around where we are, who will? I’ve got to invest in what’s around me to get the next solution or the next [IT] brains coming through.”