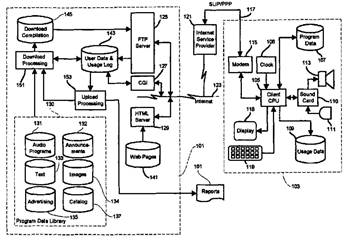 Prior art for apparatus sought.

In its sights have been broadcasters CBS and NBC, with Personal Audio asserting that these are infringing on its intellectual property rights.

In February this year, Personal Audio appeared and claimed to own a patent covering podcasting technology, defined as an "apparatus for disseminating a series of episodes represented by media files via the Internet as said episodes becomes available."

According to the EFF the patent is "dangerously broad and vague" and fails to explain how such an apparatus would actually work.

The company has since sued three podcasters and sent out letters demanding money to several others, threatening the existence of their programmes, EFF says.

EFF is now asking for help to discover prior art earlier than October 2 1996 so as to invalidate Personal Audio's patent.

Technology companies are increasingly being targeted by so-called patent trolls and face expensive court cases defending themselves if they do not pay up on demand. Last year, a Boston University study estimated the direct cost of patent trolling in 2011 to United States companies and organisations at US$29 billion, with the total loss believed to be as high as US$80 billion.

Thanks to the apparent abuse of the patent system and the high costs involved in court cases, US legislators this year introduced the Saving High-Tech Innovators from Egregious Legal Disputes Act or SHIELD which would make patent trolls liable for defendants' fees if they lost.