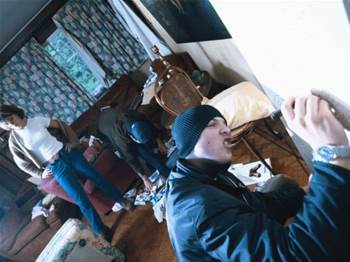 One of the first people in the UK to own a PlayStation 3 was robbed within minutes of leaving the store.

Angel Sanchez, a 21 year-old student, queued with his mother to get the new console at the stroke of midnight from Game in Walthamstow.

But within minutes he had been assaulted and robbed of the console and games which had cost him £625 (A$1,522).

"As we left a gang of youths jumped on us. I was punched in the face and mum was bashed as they grabbed my bag," he told The Sun.

"But there was no security and the police hadn't even been told about the shop opening late. I ended up in hospital but Sony and Game didn't want to know. They've treated me like a mug."

Another man who bought a console on the same night was robbed by thieves who escaped in a nearby car.

"There was a loud cheer from inside the car, where other youths were sitting, " a police spokeswoman told the paper.

"We have expressed concerns before about midnight shopping. If you are walking along in the early hours carrying a plastic bag with a computer shop emblazoned on it, it's an advert to say 'come and rob me'."

A thief in the US was shot by police in North Carolina after robbing a student of two PS3s for which he had queued for three days. Peyton Strickland, 18, and his dog were shot by armed police, one of whom has since been arrested for the shooting.

Got a news tip for our journalists? Share it with us anonymously here.
Copyright ©v3.co.uk
Tags:
3inownersplaystationrobbedsecondssecurity