PlayBook tablet approved for US government use 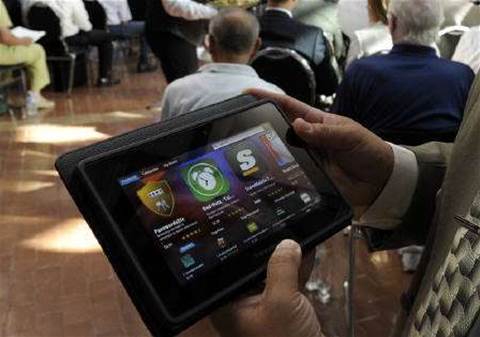 Research In Motion's PlayBook has become the first tablet officially approved for use in US federal agencies, a rare bit of good news in RIM's struggle to make headway against Apple's iPad.

The PlayBook is the first tablet computer to receive the FIPS 140-2 certification, RIM said in a statement, largely because of the security credentials on which RIM built the reputation of its BlackBerry smartphone.

"This certification ... enables the US federal government to buy with confidence, knowing that the PlayBook meets their computing policy requirements for protecting sensitive information," said Scott Totzke, a senior vice-president for BlackBerry security at RIM.

RIM's reputation for secure delivery of corporate and government data gave it a dominant position providing smartphones to bankers, lawyers and politicians.

But its grip has weakened as corporations increasingly allow employees to access work systems from other devices.

"It's like winning a game on the home field," Wunderlich Securities analyst Matthew Robison said. "It would have been very poor execution if they weren't the first to achieve that."

The shares have lost more than half their value since the start of the year, weighed down by disappointing earnings, a lackluster PlayBook launch and concern that RIM's devices fail to impress compared with Apple's iPhone and iPad and devices using Google's Android software.

Federal Information Processing Standard 140-2 (FIPS 140-2) is used to judge the security of mobile devices, servers, routers and firewalls, for use by agencies such as the Federal Bureau of Investigation.

RIM last week received the same certification for a smart card reader that locks a BlackBerry smartphone when the two are not in close proximity.

Apple has applied for certification for both the iPhone and the iPad, launched a year before RIM's PlayBook. Even so, the iPad is already seen in the hands of many bureaucrats.

"Each agency gets to decide, depending on the level of security they need, what products and processes can be used, and therefore what products they can purchase," said Evelyn Brown, spokeswoman for the National Institute of Standards and Technology, which validates the standard.

She said Apple and Android-based devices are already used in some federal agencies for simple tasks where security is not a concern.

"There's probably a lot of folks in civilian agencies that don't require that rigour," Robison said.

In addition, companies such as Good Technology have acquired FIPS certifications to manage a range of non-BlackBerry devices in security-conscious industries, including government.

Good said in June it would support 1000 iPhones and iPads for government agencies in West Virginia by the end of the year.