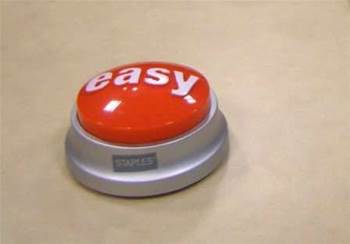 When Microsoft finds a critical security flaw, the Microsoft Security Response Centre (MSRC) goes to war. So naturally they've got a War Room.

"We get over 150,000 emails to secure@microsoft.com a year," says MSRC director Mike Reavey. "A lot of that is spam. Some of that is 'My Hotmail account is locked out'. [But] out of those, about a thousand investigations result."

Critical vulnerabilities trigger the Software Security Incident Response Plan (SSIRP). Anyone with relevant knowledge is summoned to the War Room [see photo gallery, top right], physically or virtually, to work the problem around the clock.

"Anything that has a name. Blaster, Sasser, Slammer, Zotob. Anything that's an out-of-cycle release, you can assume one of these processes is occurring back at Redmond," Reavey told iTnews.

One monitor shows a world map with the day/night boundary shown in real time. The other four monitors show the MSRC logo. For now.

There's a framed photograph of Harvey Keitel as Pulp Fiction's Winston Wolf, the fixer who remains calm in a crisis as others panic.

Next door is the Emergency Communications Team War Room, separated by a collapsible wall.

"The engineering team can focus on making sure we understand the facts. The communications team can take a complex message and make it simple," says Reavey.

Interplay between the two teams helps ensure the messages to customers aren't overly-complex but still include the important nuances.

Behind a black curtain sit the servers for what is presumably the secure network for developing and testing patches. Around twenty ordinary boxes are lined up on three white shelves, a mix of Dell, Compaq and unbranded machines.

No questions answered about them, though. And no photographs.

Stilgherrian travelled to Redmond, Washington, as a guest of Microsoft.