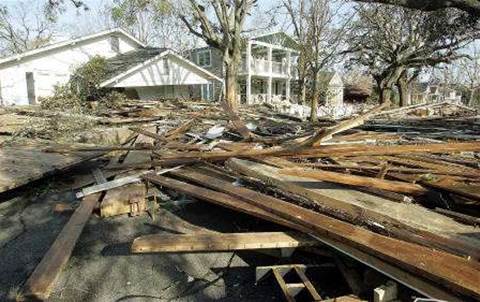 Telephone companies struggled to restore service and measure the damage to their networks in Louisiana and Mississippi on Tuesday after Hurricane Katrina cut power and triggered severe flooding.

WASHINGTON (Reuters) - Telephone companies struggled to restore service and measure the damage to their networks in Louisiana and Mississippi on Tuesday after Hurricane Katrina cut power and triggered severe flooding.

Residents reported trouble making and receiving calls throughout the day, and many turned to the Internet and text messaging to try and reach relatives and friends.

"It's spotty at best," said Josh Britton, a student at Louisiana State University in Baton Rouge. With cell phones, "a lot of times you'll have to try for several minutes to make an outgoing call ... In several of the parishes in southeast Louisiana there's virtually zero communication capability."

A spokesman for BellSouth Corp., the largest local telephone company in the region, said while the company estimated about 53,000 lines were out in the two states, the actual numbers were likely to be higher.

The three largest wireless companies -- Cingular Wireless, Verizon Wireless and Sprint Nextel Corp. -- all said cellular service in the area had been affected as well.

All companies said power losses were the main threat for further service failures, but that flooding was hampering their efforts to reach network equipment.

Entergy Corp. reported more than a million customers without power in Louisiana and Mississippi, and warned customers to expect a long and difficult restoration that could take weeks.

New Orleans Mayor Ray Nagin told television station WWL that 80 percent of the city was under water, and authorities declared martial law in some areas.

He said BellSouth had about 34,000 lines down in Louisiana, but that many people simply weren't able to report outages. The company has about 800,000 customers in New Orleans alone.

"We have the potential for our outages to go up, and we're prepared for that," Chandler said. "The biggest challenge we have right now is we can't get out there."

In Mississippi, Chandler said BellSouth had 143 switches running on generators and about 1,500 terminals on batteries. The batteries in the terminals -- which handle telephone signals between homes and the central switch -- could last a day or two before they would need to be replaced.

Cingular, the largest U.S. wireless service, said it was suffering network disruptions in New Orleans and Baton Rouge, Louisiana, as well as in Mississippi.

Verizon said in New Orleans, many cell sites were out of service, limiting customers' ability to place or receive calls. The company said customers who evacuated may be able to place calls but not receive calls, and mobile-to-mobile calling might also be available to some customers.

Sprint Nextel, the No. 3 U.S. mobile service, said it was having its worst network problems in New Orleans, where callers were unable to make long distance calls outside the city, where it keeps key network equipment that handles calls from the surrounding regions.

"Customers will see issues making long distance or wireless calls within the area hit by the hurricane due to power outages and flooding," said Sprint Nextel spokesman Charles Fleckenstein.

Cellular services rely on towers to send and receive signals from customers' cellular phones. Both companies said many of their towers were running on backup power, but flooding was hampering their efforts to reach some sites.

Sprint Nextel and Cingular said they were prepared to use truck-mounted cellular towers to bolster service in areas where they couldn't reach their equipment due to flooding.

Several Internet posters said telephone service of any kind in the affected areas was intermittent, but a few found text messages could get through to cell phones where regular voice calls could not.

Britton and dozens of other people with Internet access used their blogs to provide running updates on the conditions in specific neighborhoods, to keep track of friends and pass along requests for help and photographs of the damage.

(With additional reporting by Sinead Carew in New York)