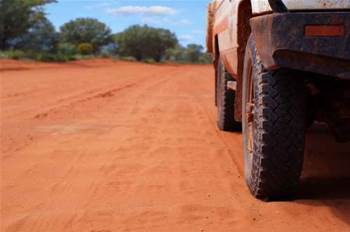 Outback Armour hopes to sell to the mines.

The company, which has "circa five employees", plans to engineer and sell raised suspension and recovery equipment - such as snatch straps, winch recovery and bow shackles - for 4WD vehicles.

In particular, it hopes to service 4WD fleets in industries such as mining and defence.

"From an OH&S point of view, if someone goes out to a mine site, they generally need to be able to recover themselves or recover other people that they come across, if vehicles break down," CEO Richard Catelan told iTnews.

Unlike other start-ups, Outback Armour will begin operations on an enterprise-grade SAP platform, rather than starting with smaller, SMB-oriented systems.

"We plan on growing," Catelan said of the system choice. "We don't plan on being small and a startup for very long".

Catelan is also keen to learn an IT system only once. "I'm not an accountant," he said.

The Business ByDesign system was provisioned over four weeks with assistance from SAP partner, CN Group.

Catelan said the system is now being populated with "product data [and] prospects lists".

Employees also use Google Apps on the desktop, and Catelan hopes to take advantage of new and future integration between the Apps suite and SAP Business ByDesign.

Catelan hopes to equip his future sales force with mobile systems and SAP supports that vision.

"The idea is that when we do have a sales team thats out roaming around that they'll use either a tablet PC or smartphone and be able to log in and update customer profiles or orders, put a file note in the system or allocate it live on the spot to somebody back in the office so it then gets actioned," he said.

"The real opportunity here is to make sure all information is captured on the way, [that] promises are actioned, [and] to be able to do live checks in the field on the progress of orders or the availability of stock, and make things happen in the system, live, while you're there."

Outback Armour also hopes to use a third-party add-in called SAP social media analytics, which was created by NetBase.

SAP's vice president of on-demand solutions, Greg Harbor, said the add-in enabled "sentiment analysis of [online] forums" such as Facebook and Twitter, enabling Outback Armour to keep "an ear to the ground [and] get closer to customers across multiple channels".