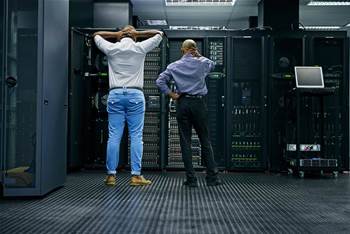 Resorting to pen and paper.

Staff at the Department of Human Services claim they have been unable to provide child support services or assistance to families for almost a week due to an outage to the country's critical child support IT systems.

The Community and Public Sector Union today said the two systems - which are running in parallel as the department works to replace the legacy Cuba platform - had been out of action since Thursday last week.

The Cuba system came back online in a limited capacity today, a CPSU spokesperson told iTnews, but the fledging SAP-based Pluto system was still inaccessible at the time of writing.

The outage left staff locked out of customer files and forced to take messages on pen and paper, the CPSU claimed. It also said workers had not been advised when the systems would be operational.

However DHS argued the systems have not been "completely inoperative" for four days.

"Some customers and staff have experienced intermittent issues which have been resolved. Full services are available for customers," DHS general manager Hank Jongen said in a statement.

"Child support customers have not missed payments ... and will not be affected ahead of the Easter holiday. Staff have been supported throughout the process with regular updates from management.

"We apologise for any inconvenience caused."

A CPSU spokesperson said the union had received widespread reports of the outage from DHS offices around the country.

"We haven't heard of a single case of a person in child support having a working system between last Thursday and this morning," a spokesperson told iTnews.

Cuba processes around $3.5 billion each year in support payments for around 1.2 million children from separated parents.

It was first introduced in 2002. DHS started working to replace the platform in 2009, and was given $102.2 million over five years in the 2013 budget to do so with SAP technology and the help of Accenture.

However DHS decided in mid-2016 to revise the scope and bring much of the work back in house, while leveraging work being done under the $1 billion welfare payments infrastructure transformation (WPIT) program.

The new 'Pluto' SAP platform debuted in July 2017, but is yet to replace all the modules of the Cuba platform. It means DHS staff are currently required to use both systems to complete their work.

"Cuba ... has traditionally looked after some front-end functions for the processing staff, but it has also had a calculation engine that sits in the back end that helps with assessments and  comes up with figures and also stores data in a supporting legacy database," DHS acting CIO Charles McHardie told a recent parliamentary committee hearing.

"What we have done with Pluto is to put a new staff-facing front end on that system, but the assessments and the calculations are still done in Cuba in the back end, in the calculation engine.

"The supporting database that supports Cuba is synchronised with the SAP database so that they remain in sync and we have no payment assurance mishaps. That is done regularly."