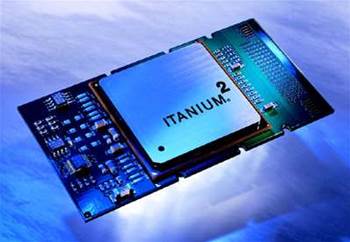 Remake of Weekend at Bernie's.

HP's efforts to keep Intel's 'dead' Itanium chip alive "is a remake of Weekend at Bernie's" designed to protect HP's services business, according to Oracle's lawyers.

HP had "secretly contracted with Intel to keep churning out Itaniums so that HP can maintain the appearance that a dead microprocessor is still alive," according to court documents posted by the Wall Street Journal's All Things Digital blog.

Oracle filed for an extension to produce documents in its defence against HP, which launched a claim in May aimed at forcing Oracle to continue supporting Itanium.

The dispute stems from Oracle's March announcement that it would stop making software for the high-end processor, which HP says is a breach of contract.

Intel would have ended the product had HP not paid it to do so, according to Oracle, which is facing a lawsuit because its decision to end support "undermined the rationale for paying Intel".

HP wants Itanium to continue because its success rate at winning service contracts on non-HP UX systems, like Linux on x86 microprocessors, is much lower than with customers running HP UX systems, Oracle argues.

"Thus when customers migrate to new platforms, HP loses the service contract. This is a multi-billion dollar problem for HP," Oracle alleged.

Oracle also claimed HP wanted to keep its Intel Itanium deal a secret because it knew customers wouldn't invest in the platform if they did not believe Intel itself had a roadmap for the product's future.

HP fired back, alleging Oracle's decision to end support for HP's Itanium "was an illicit business strategy it conjured to try to force Itanium customers into buying Sun servers, and destroy choice in the marketplace."

Intel's boss Paul Otellini came out after Oracle's announcement stating that Intel does have a roadmap for Itanium in its codenamed forms Poulson (due in 2012) and Kittson, covering customers for the next decade.