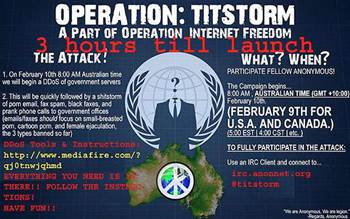 Operation Titstorm will hit the streets of Australian cities in a "peaceful protest" against mandatory internet censorship this Saturday.

Events are planned in Sydney, Melbourne, Perth, Brisbane, Adelaide, Newcastle and Canberra at various times on 20 February. More than ten members of Anonymous are expected to attend each event.

However, organisers expect that a majority of the protest will take place overseas. Anonymous members have been urged to lead protests at Australian embassies around the world.

"We wish to oppose this filter because we're not only representing Australia, but the world," a Project Freeweb organiser who goes by the alias 'Infinite' told iTnews.

"If passed, this legislation will set a disturbing precedent at an international level.

"The public, not the Government, should have the right to decide what is deemed appropriate for you or your family to be exposed to."

'Infinite' hoped that Project Freeweb would have more of a 'long term' effect on public perception of the filter than Operation Titstorm, which was criticised for harming more moderate efforts to campaign against internet censorship.

"Many of our number are productive, intelligent members of society," said Infinite, who is a Web designer.

"Some of the members of Anonymous, while feeling that the motivations behind Operation Titstorm were understandable and to a certain extent warranted, also felt that it cast a bad light upon the group as a whole."

Protesters have been instructed to study background information on Senator Conroy's filter plans and ACMA, and have been told not to wear masks.

While Anonymous members may be risking their post-Titstorm anonymity by appearing at the protests, 'Infinite' said that being involved in one event did not necessarily mean the individual was involved in the other.

Those involved in the DDoS attacks had taken precautions to ensure their anonymity, and many were not residents of Australia, he said.

To critics of Operation Titstorm, he said: "Anonymous understands their frustration, yet they fail to comprehend that one of the most important creations in the history of mankind is about to fall into the control of the government. And that must not happen.