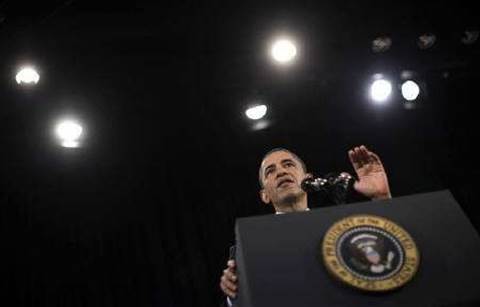 To be funded by US$27.8 billion spectrum auctions.

U.S. President Barack Obama has outlined his plan to expand high speed wireless Internet service to 98 percent of Americans while reducing the U.S. deficit by US$9.6 billion over the next 10 years.

During a trip to Marquette, Michigan -- a politically important state that has been especially hard hit by the rough U.S. economy -- the president proposed investing US$5 billion into a fund that will ensure fast wireless technology is made available to rural areas across the country.

"This isn't just about a faster internet or being able to find a friend on Facebook. It's about connecting every corner of America to the digital age," Obama told an audience at Northern Michigan University.

He also called for US$10.7 billion to be invested in developing a wireless network to support public safety agencies, a proposal that will be in his fiscal 2012 budget, due to be released on Monday.

During his State of the Union address Obama, a Democrat, called for expanding high-speed wireless services to satisfy a voracious appetite of consumers and businesses for the technology.

His administration has endorsed making 500 megahertz of wireless airwaves, or spectrum, available over the next decade to meet the growing demand for broadband services, including the widely popular Apple iPad and proliferation of smartphones.

The Federal Communications Commission hopes to "repurpose" 120 megahertz of spectrum through incentive auctions where television broadcasters would voluntarily give up spectrum in exchange for a portion of the auction proceeds.

WASHINGTON TO RAISE US$27.8 BILLION

"By selling private companies the rights to these airwaves, we won't just encourage private investment and expand wireless access; we'll actually going to bring in revenues that lower our deficits," Obama said.

The White House said it expects those auctions and more efficient use of government spectrum to raise US$27.8 billion over the next decade. That figure is an estimate, however, and could end up lower or higher depending on the success of the auctioning process.

Congress must pass legislation to give the FCC the authority to conduct the incentive auctions. There could be resistance from lawmakers if they fear the auctions could apply undue pressure to broadcasters in their districts to give up spectrum.

In addition to the fund to help rural areas, Obama proposes putting US$3 billion from those proceeds towards "research and development of emerging wireless technologies and applications," the White House said in a statement ahead of the president's trip.

Another US$9.6 billion from the proceeds would be applied to curbing the deficit, a key goal of Obama's next two years in office and a top demand from Republicans, who control the House of Representatives and will likely make deficit reduction a high profile topic in the 2012 presidential campaign.

Obama's fiscal 2012 budget will focus on deficit curbs while investing in areas such as Internet broadband that the president believes are crucial for boosting U.S. competitiveness.