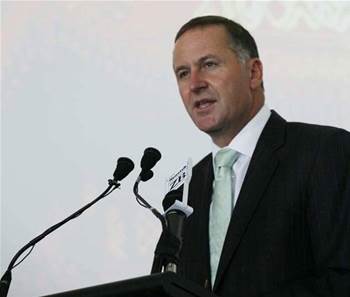 Opposition to the new law, which critics say allows for large-scale warrantless spying without independent oversight, took form in demonstrations nationwide last month and sharp criticism from lobby groups and the Law Society which labelled the bill unnecessary.

Prime Minister John Key called opponents of the bill "ill-informed". He said the bill clarified what the GCSB can and cannot do, tightening up existing law introduced by opposition Labour a decade ago.

"Nothing in this legislation allows for wholesale spying on New Zealanders. It actually tightens, not widens, the existing regime," Key said.

According to Key, the law makes the three functions of GCSB clear. These include information assurance and cyber security, foreign intelligence and assisting other government agencies.

Key said authorities have already logged 204 cyber attack incidents this year, more than all of last year, and that GCSB with its specialist skills can help protect departments and companies under the new law.

A recent official review found that the GCSB had for the last decade illegally spied on 88 New Zealanders including Kim Dotcom in the run-up to the police raid on his mansion. Key said this amounted to an average of fewer than nine people a year, and therefore, was not wholesale spying on New Zealanders.

In an often heated debate, Labour and Green MPs criticised the bill in its third reading in the chamber as widening the GCSB's powers and constraining New Zealanders' freedom.

Leader of NZ Labour David Shearer said the passing of the bill was a "sad day" and the new legislation was "ad hoc".

"It is Mickey Mouse. It will do nothing to reassure New Zealanders that their private lives are safe from the prying eyes of spies," Shearer said.

Key promised he and GCSB director Ian Fletcher would resign if the agency is found to have conducted unlawful mass surveillance.