NSW TAFE could become a player in online education market 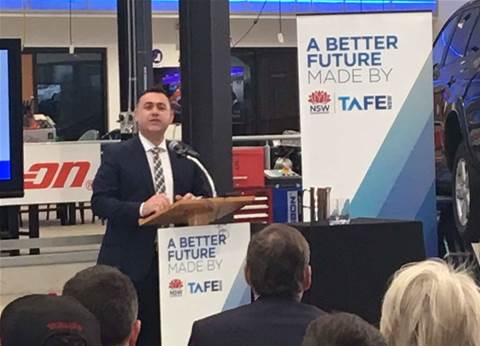 Commercial push to be headed from new 'digital HQ'.

A "once in a generation" overhaul of NSW TAFE could see the vocational education provider carve out a slice of the online education market, if it can make the most of a renewed investment in its e-learning platforms.

This morning NSW Skills Minister John Barilaro unveiled the state’s ‘One TAFE’ vision, which will see semi-autonomous TAFE institutes dismantled in favour of a centralised structure where all state campuses operate collectively.

The overhaul is expected to deliver "significant savings on back office administration", but the minister has yet to estimate the number of job losses it could incur.

The government also wants to consolidate 11 online learning platforms currently operated by different TAFE institutes into a single “strong innovative digital platform” - with an eye towards turning this IT investment into commercial opportunities in the online education market down the line.

“Students can be sure they have access to the best available content on one of the best single platforms,” Barilaro said.

“TAFE should build this new business and aggressively look out for new opportunities in new markets in other states and other countries, to build TAFE’s reputation as a leading online provider."

The commercial push is set to be led out of a “digital headquarters" established in a NSW regional centre, to further “break down the tyranny of distance”.

Barilaro also indicated he would direct TAFE executives to look for opportunities to relocate the rest of TAFE’s corporate function - including, potentially, IT - to a non-metropolitan site.

The One TAFE vision commits to the establishment of a videoconferencing-enabled “connected learning centre” in regional towns every month for the coming year.

The draft strategy is due to be formally considered by the TAFE board tomorrow, and if it is endorsed it will then go to the government for approval.

TAFE itself will be in charge of deciding how to deliver on Barilaro’s vision, including the towns and regional centres that could host a new digital hub and corporate headquarters.

The minister complained that TAFE’s administration spend had peaked in recent years. In 1998, he claimed, just 18 cents in the dollar was spent on back office duties, with the rest going to classrooms. Now, he said, administration sucks up 40 to 60 cents in every dollar - a figure the government is desperate to reduce.

The plan has already been slammed by the NSW Teachers Federation, which said the state is undermining the 125-year-old education institute.

“The Baird government is not dealing with the fundamental problem facing NSW TAFE which is that vocational education is now unaffordable for many students,” acting president Denis Fitzgerald said in a statement.