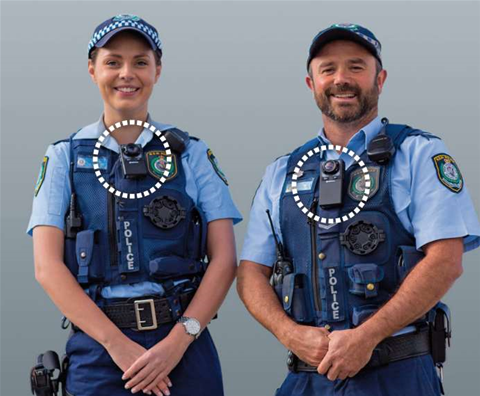 NSW Police has chosen Fujitsu to faciliate the rollout of body-worn video cameras to cops on the beat from today, allowing them to record incidents or events in support of an investigation.

NSWPOL first revealed its plans for the cameras late last year. It said it would train 1000 officers across 16 locations to use the devices.

It went to market for an initial 267 devices as well as a storage, searching and authentication system to handle the ensuing data produced.

The project has already been handed $4 million in funding from the government over two years for the project.

The force today revealed it had chosen a joint Fujitsu/M-View solution to underpin the cameras. NSW Police officers will start wearing the devices from today.

The Eastern Beaches Local Area Command is the first site to be equipped with the cameras.

It will be followed by police commands in Kings Cross and Botany Bay and later the police transport command and public order and riot squad.

NSWPOL wants to equip police across the state as soon as possible.

The force stressed the devices would not constantly record, but would rather be activated for use in "operational policing activities" or where recording is deemed to be in the public interest.

The camers will be displayed prominently on an officer's uniform, and "where practical", members of the public will be informed they are being recorded.

“The vision will essentially be used for evidence gathering to support prosecutions, but it will also allow police to analyse interactions, improve practices and support officer training and education," NSW Police Force commissioner Andrew Scipione

“[The cameras] will hold everyone to account for their actions, including police. A picture is worth a thousand words, and if you’re recorded doing the wrong thing – no matter who you are – the evidence will be tough to dispute."

Officers must initiate recording to capture footage, however the cameras provide at least a 30-second back capture of vision prior to the record button being pushed.

Footage from the devices is encrypted and stored on the camera, and erased once downloaded onto the NSWPOL database, the force said.

The force has created five guiding principles for appropriate and lawful use of the technology.

The equipment will be used in the lawful execution of NSWPOL duties, and its use will be obvious and overt, guideline one states.

It will generally be used to record events, incidents and evidence, but there will be some instances where use of the technology will not be appropriate, the second guideline advises.

The cameras will support, not replace, conventional forms of evidence gathering; recordings will be securely processed and managed in line with legal and policy requirements; and the force will provide general information to the public on the use of body-worn cameras.

NSW follows its counterparts in Queensland and South Australia to introduce the technology, as well as many jurisdictions in the United States.

The NSW government also today announced it would trial body-worn cameras for a limited number of its train staff.

Staff of the regional train and coach TrainLink service will provide recordings of passenger disruptions to police when required, and footage will also be used for training purposes.

“We’re trialling this technology with the aim of reducing incidents that could harm staff and customers or make them feel unsafe,” Constance said.

“The small cameras are wearable and can live-stream images of incidents to a central control room for an immediate response from authorities if necessary.”

The trial will roll out to an undisclosed number of services, and be monitored to determine its effectiveness for the entirety of the TrainLink network.