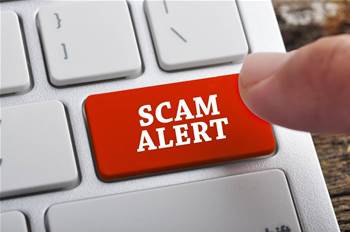 “These types of scams are becoming more frequent as scammers take advantage of new technology, products and services to convince the community to provide their personal information,” Craft said.

NSW Police has advised that the public shouldn’t allow people to remotely access their computer, especially if the person is unknown or can’t be identified - especially if they ask to download TeamViewer or any other remote access tool.

TeamViewer has achieved somewhat of a cult status for producing surprises with sysadmins, not least because of some its more alternative uses. But we digress.

The NSW Police are urging people to be wary of unsolicited phone calls, warning that callers engaged in legitimate businesses “don’t just call customers and ask for confidential information”.

“Many of these scams are quite sophisticated, but there is almost always a ‘tell’; we urge all individuals and businesses to ensure they remain vigilant when dealing with requests to vary account details or payment methods or to download software,” Craft said.

As with most other scams, the giveaway is that the product or outcome on offer is usually too good to be true, Craft said, reminding people to be alert and suspicious of unsolicited phone calls by people requesting personal details or for the receiver to download anything on the internet.

“Never give your personal credit card or online account details over the phone unless you made the call and the phone number came from a trusted source.

“If you have doubts about the identity of any caller who claims to represent a business, organisation or government department, contact the body directly,” he added.

The police force said any suspicious activity should be reported to NSW Police or Scam Watch, and that people shouldn’t “let scammers press your buttons” as they use “detailed scripts to convince you that they’re the real deal and create a high-pressure situation to make a decision on the spot”.

If concerned about a scam or possible loss of personal data, NSW Police advises people to run an antivirus scan, contact their financial institutions, and report the matter to the police or to Scam Watch.

The Australian Competition and Consumer Commission reported that Australian lost $4.8 million to remote access scams last year, an increase of 95 percent from 2017.