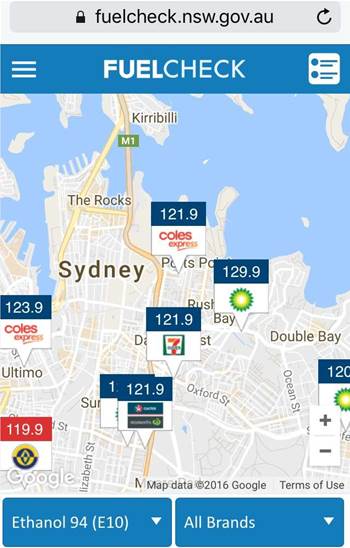 NRMA claims it could save drivers $500 a year.

The NSW government has hit go on a beta version of its real-time fuel price comparison website, mapping price changes for drivers following the introduction of service station reporting laws.

Fair Trading Minister Victor Dominello unveiled the FuelCheck site at a service station in Erskineville this morning. The site is backed by an open-format API the NSW government is freely offering to organisations and software developers.

The government will collect feedback on the beta site’s functionality over the coming months.

The first third-party user of the API is the NRMA, which has added a fuel check function to its member app that uses the government data to guide drivers to the cheapest fuel in their area.

The motoring lobby’s president Kyle Loades claimed the tool could save motorists up to $500 a year on their petrol spend.

Dominello said the website and NRMA app were only the beginning of what he hopes to see from the legally enforced price transparency.

“The more we open up data the more we empower the people of this state. In many ways it is an evolution of democracy," he said.

The state has had the power to demand price change data - which is entered by service station operators via an online portal or phone call to NSW Fair Trading - for many months.

“Before this service the big oil companies had this information to themselves," Dominello said of FuelCheck.

“They had informed sources that would go around and get this information, but now we have got that information and we are giving it and the power back to consumers."

NRMA's Loades said he was optimistic a proliferation of apps and other price check tools will eventually drive down the cost of fuel.

“We feel that transparency and petrol stations fighting for the driver’s dollar will lessen the gap. It will become more competitive and the average price will drop as a result,” he said.