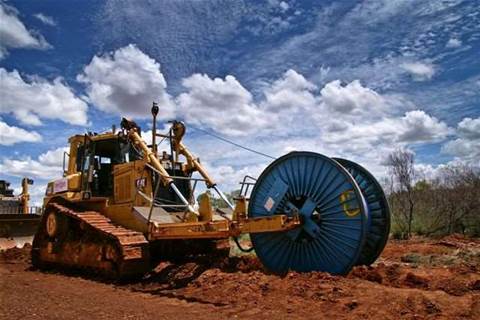 Update 5.25PM: The cable has successfully been respliced and traffic is flowing across the link.

Nextgen Networks will today attempt a "temporary" fix on a flood-damaged fibre cable linking Sydney and Brisbane after field technicians got their first look at the site yesterday afternoon.

A post-incident report obtained by iTnews revealed the impacted cable was buried about 1.5 metres under a dirt road running under a railway bridge on an enbankment.

"The railway embankment servered as a dam wall with the road under it acting like a river spillway," Nextgen said.

"It appears that the dirt road turned into a river such that the wash eroded the surface to a depth that exposed the cable which was then damaged from floating debris."

"We have now accessed one end of the cable and will commence digging (with heavy machinery) [today] to expose the other end, create new cable joints at both ends and then install a temporary cable for rapid service restoration."

The company said it had been assisted by local farmers; a favour it repaid by using the hired machinery to "do some reinstatement work on their properties".

Nextgen said that monitoring tests had determined that the cable and electronic paths were clear "on either side of the damaged area".

The cable, located near Thagoona, west of Ipswich, had been cut since Tuesday.

All traffic that usually ran across the cable had been diverted to coastal fibre routes.

iTnews reported earlier this week that Nextgen was also organising "wavelength swaps" with other carriers to combat the impact of the cut cable.

The company said that it also had one microwave service down due to flood damage.

Nextgen field technicians were also "doing a reconciliation of services with ODFs [optical fibre distribution frames] and electronics in flooded customer basements against monitored equipment that is showing outages."

An ODF is usually where the fibre cable enters a building.