A fingerprint sensor, better camera and a 64-bit A7 processor are the main new features in Apple's 5s high-end iPhone, unveiled by chief executive Tim Cook in San Francisco this morning but otherwise, there were few surprises after a large number of leaks.

Apple claims to have the first 64-bit processor in a smartphone, and promises a 40-fold jump in overall performance, and 56 times faster graphics as a result.

The new iOS 7 operating system that will be released a few days ahead of the new iPhones includes a native 64-bit kernel, libraries and drivers. Built-in apps will all be 64-bit too, but iOS 7 can also run 32-bit apps.

An M7 motion co-processor is also new with the iPhone 5s, and forms part of the A7 system-on-chip (SoC).

Fingerprints are stored by encryption on the iPhone 5s and not uploaded to Apple's iCloud or any other networked server, according to Phil Schiller, the company vice president of devices.

They can be used not just to unlock the phone but also to authenticate App Store and iTunes purchases.

The device can also authenticate multiple users, meaning the 5s can be shared without having to reveal passcodes.

There is currently no application programming interface for use of the Touch ID sensor for corporate or retail apps, iTnews understands.

The resolution remains at 8MP although auto-focus is said to be twice as fast.

Also announced this morning is the low cost iPhone 5c that sports a polycarbonate plastic case in multiple colours.

The hardware for the 5c is very similar to the existing iPhone 5 handset, which will be discontinued.

Apart from the plastic case, the 5c has a better front-facing camera and improved battery but otherwise, it comes with same A6 processor, 8MP camera and LTE 4G broadband capability as the older iPhone 5.

The official release date for the new devices in Australia and New Zealand is September 21.

UK analyst Ian Fogg told iTnews the new features added to Apple's high-end iPhone, as well as the introduction of a lower-end model, were critical as the company faces increased competition from other players in the smartphone market.

"The updates that Apple makes to its iPhone range are necessary for Apple's success in the mobile handset market in 2013 but they are not sufficient for the longer term," he said.

"Apple will need to innovate significantly in 2014 with both improved software and new iPhone hardware to counter the growing threat from Android smartphones and ensure that Apple's mobile success continues."

He said the new security measures added into iOS7 and the iPhone 5S would make the iPhone an "even better platform for monetisation".

"The fingerprint sensor on the new 5S helps Apple extend its makes the iPhone a safer device for users to trust with financial details ecosystem into retail as well as helping users safely buy App Store apps.

"Apple is also making it harder for thieves to bypass ‘Find my iPhone’ and ‘Remote wipe’ because users now need an Apple ID and password to turn them off." 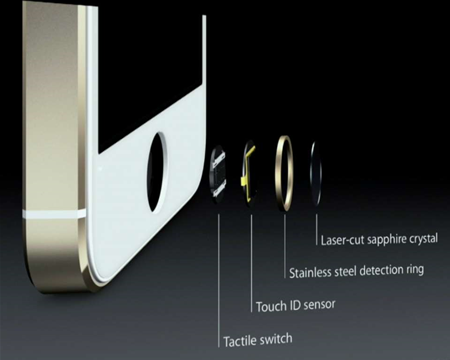 Apple's new fingerprint scanner is located on the home button
Got a news tip for our journalists? Share it with us anonymously here.