NBN to offer TV connections through fibre for greenfields 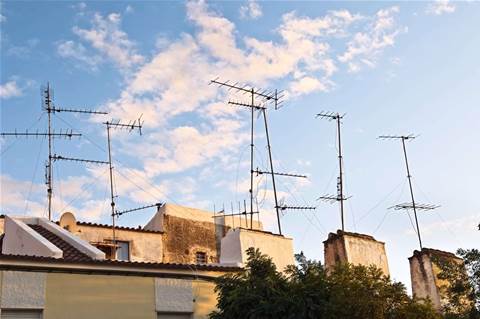 Ditching aerials to come at a cost.

NBN will give developers the opportunity to ditch aerial cables for free-to-air television in their greenfields developments by offering the infrastructure through fibre.

The national network builder today revealed it was working on a TV infrastructure offering for new developments, which it is planning to make available in the first quarter of next year.

NBN would charge for the service on top of the fees it levies on developers to connect their apartment blocks and estates with fibre.

NBN can charge developers a one-time connection fee of $300 for fibre, as well as $600 for connections to single-dwelling units and $400 for multi-dwelling units, among other charges.

The company started charging for fibre connections to greenfields - which it had previously provided for free - in March this year following the government's update to a policy governing the provision of fibre to new developments.

It would provide the underlying TV infrastructure on top of which RSPs could offer content services.

Simon said the fees for the service would depend on how and where the infrastructure was provided. The company said it was still working to finalise the proposed fee structure.

The company is similarly gearing up to launch its commercial fibre-to-the-node and hybrid-fibre coaxial products to retail partners.

According to its latest product roadmap, NBN is on track to launch a commercial FTTN service this September following the ACCC's approval of Telstra's migration plan this month as part of the new NBN definitive agreements.

NBN will begin onboarding retail service providers to the FTTN product in August ahead of the September commercial launch. It had started business readiness testing earlier this year.

Simon said the company was building up a bank of premises that will be technically ready for release come September.

In April NBN revealed it had embarked on a second trial of fibre-to-the-node technology for 200 end-users in NSW's Lake Macquarie as part of its 1000 node construction trial.

Simon said he expected 220,000 end users would be ready by launch day, but not all would be opened up as ready for service immediately.

"We won't open the floodgates on day one, we tend to evolve the premises from trial to launch," Simon said.

"We'll probably release a much smaller number, in the single thousands to teens of thousands in the initial launch."

The company has previously scheduled Belmont and Gorokan in NSW to be first in line, followed in October by Bundaberg in Queensland, and Queensland's Gympie and Boolaroo and NSW's Morisset in November.

Hamilton and Woy Woy in NSW have been scheduled for December to January, and in February Bribie Island, Caboolture and Warner in Queensland will be made active.

NBN also today revealed it would extend the length of its HFC customer pilot by three months to give RSPs enough time to get their products, services and IT systems ready, Simon said.

He said the extension to the pilot - which will run from November 30 this year to June 2016 - would also ensure the company's "critical" period for FTTN, HFC and the long-term satellite would not be overly cluttered.

The pilot will run up to and extend past the planned launch date for the HFC product in the second quarter of next year.

NBN will begin onboarding RSPs for HFC in Q1 and business readiness testing in the lead up to the launch in Q2.

Simon said the 1000 premises used in the HFC construction trial in Caroma, NSW and Wheelers Hill in Victoria would likely be used in the upcoming customer trial.

NBN released its fibre-to-the-basement for sale to RSPs in March.