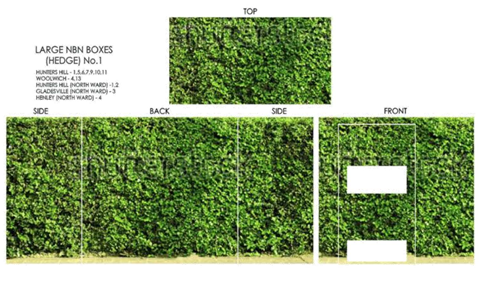 A node cabinet wrap proposed by Hunter's Hill Council to disguise it as a hedge.

NBN Co’s large green node cabinets are being turned into canvases for local art and photography, with over 100 so far either receiving - or in line to receive - the ‘wrap’ treatment.

The wrapping of nodes in artwork and photography is being largely led by NBN delivery partner Downer Group and began in the NSW western town of Dubbo, where a competition was run for schoolchildren to contribute pieces of art.

Since then, nodes in various parts of Australia have been, or are in the process of being, decorated.

The idea of wrapping nodes - or other large NBN roadside equipment - was first raised years ago as a possible way of combating graffiti of fibre distribution hubs in the Northern Territory rollout.

However, iTnews was unable to confirm whether or not the proposal received the go-ahead at the time, and several years have since passed.

Node wrapping, however, resurfaced in 2018, mostly in the portion of the NBN fibre-to-the-node footprint that Downer Group has been contracted to build.

iTnews has uncovered about 110 node cabinets are in line for the treatment to date, though there could feasibly be more given that they are not part of a formal program of work.

NBN Co is known to have been directly involved in one wrapping project in Mount Isa, where five node cabinets have been decorated. The work was a collaboration between the local council, Queensland Police, and NBN Co’s state operations team.

“In Mount Isa, five FTTN cabinets in prominent locations including the city centre, the police station and at the airport, were transformed with Indigenous-inspired artwork, created by local school students,” an NBN Co spokesperson said.

“The project was initiated by NBN Co under our Reconciliation Action Plan to help create a sense of community ownership and as a way to beautify the streetscape and deter graffiti.

“Thirteen students in grades 4-6 from Happy Valley State School’s art class put paint to paper during National Reconciliation Week (27 May- 3 June 2018) and were asked to come up with their impressions of reconciliation to help celebrate this year’s theme of ‘Don’t Keep History A Mystery.’”

Elsewhere, one of the Downer-led initiatives is in Moree where 15 node cabinets are set to be decorated. It is understood half of those have been completed to date.

Downer Group started wrapping node cabinets in Dubbo in western NSW, where 25 have been decorated.

General manager for technology and communications services in Downer’s Transport and Infrastructure business, Luke Rowlands, told iTnews that the initiative was about engaging the community while also reducing the potential for the nodes to be graffitied.

He said Downer had made a concerted effort to showcase the work of local Indigenous artists. “Their work is bright and vibrant,” he said.

In addition to Dubbo and Moree, Downer Group is wrapping nodes in Tamworth (18), Erskineville and Newtown in Sydney’s inner west (8), and Edgecliff in Sydney’s east (1).

Plans are also afoot to wrap 20 node cabinets in Byron Bay, six in Inverell, and nine in the Mount Tamborine / Gold Coast area.

In Inverell council minutes from a fortnight ago, it was noted [pdf] that “five local artists were awarded prizes of $2000 each from NBN for their images that will be used to decorate NBN node cabinets” in the town.

iTnews is also aware of other node wrapping projects.

Hunter’s Hill Council in Sydney said earlier this year that it had struck up a “unique co-partner collaboration” with NBN Co and the local community to wrap 17 nodes in historic photos from the area.

“NBN Co will fully fund the wrapping of nodes that fall within the Hunters Hill Conservation Zone,” council said. [pdf]

“It is hoped that further funding can be sourced (either through grants or benefactors) to complete additional key sites that fall outside the Conservation Zone.”

A photo published online by News Limited in July showed one of the wrapped nodes.

It was also understood that delivery partners other than Downer Group may be pursuing similar node wrapping works, but this could not be confirmed by the time of publication.

Those that have wrapped or painted nodes say they worked with NBN Co to ensure that the decorations did not cause heat problems for the equipment inside the cabinets.

Telecommunications assets such mobile phone towers have historically been given varying treatments - from paint to full disguises - to try to get them to blend into the local environment more.

There are a number of websites that have run galleries of photos of cellphone towers disguised as trees. In that way, Hunters Hill is continuing that tradition in trying to disguise node cabinets as hedges.