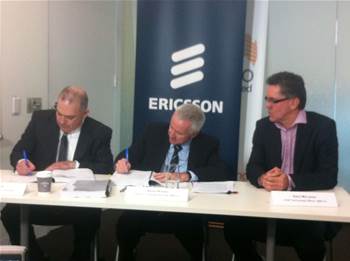 NBN Co has flagged future plans to upgrade fixed wireless broadband services to peak speeds in excess of the minimum 12 Mbps to be served up by the National Broadband Network.

The company yesterday awarded a $1.1 billion contract to Ericsson to roll out Long Term Evolution (LTE) technology for the network, which would service about 400,000 premises.

Base stations would be rolled out across Australia over three years beginning in the middle of 2012.

The contract, believed to have been won uncontested, also included ongoing software upgrades, maintenance and expansion of the wireless network to 2021.

The network would run in the 2.3 GHz spectrum block NBN Co acquired from Austar earlier this year.

Architecturally, the network connected tri-sector base stations to a hub site via a 180 Mbps link. From there, the hub was connected to a fibre access point using a 900 Mbps aggregated microwave link, which handed traffic off to a gigabit fibre link connected to the nearest fibre access node.

He said the wholesaler would guarantee speeds of at least 500 Kbps to the end-user and peak bandwidth of 12Mbps.

Quality of service would be deployed on the network to guarantee bandwidth to certain applications.

“As you begin to deliver higher speeds we want to make sure that that speed is available to everyone in the wireless footprint and release it to everyone,” McLaren said.

The current LTE roadmap offers bandwidth speeds in excess of 100 Mbps and a potential 1 Gbps down/200 Mbps uplink under the LTE-Advanced standard.

McLaren said the decision to go with LTE for the fixed wireless network was based on the technology’s extensive roadmap.

“We’re about predictability and quality of the actual service over trying to get access to people to higher speeds,” he said.

“Although it is wireless we are delivering a network that is very much engineered around quality, around performance in order to deliver high quality services to the end users which are actually going to connect to the service.”

NBN Co would not say how many base stations would be deployed. Ericsson strategic marketing manager Kursten Leins said the technology standard was capable of delivering peak speeds of 12 Mbps at a range of up to 100 kilometres.

Current LTE standards were also capable of latency of around 20 to 30 milliseconds - a quarter of that usually experienced over current HSPA networks - though McLaren this week was cautious to guarantee better latency than 3G networks.

NBN Co was negotiating with the Australian Communications and Media Authority to purchase further spectrum for the fixed wireless network in Western Australia and the Northern Territory.

Head of corporate services Kevin Brown told iTnews that NBN Co expected to purchase a portion of the same 2.3GHz spectrum band used in other states.

The 3.5GHz spectrum allocation that NBN Co snared from Austar earlier this year was expected to be used for the uplink portion of the wholesaler’s satellite network.

In addition to NBN Co, Ericsson has snared a major LTE contract with Telstra this year for a mobile - rather than fixed - wireless deployment.