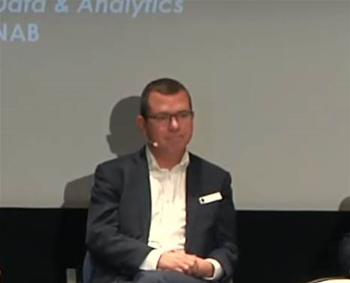 NAB is set to run a proof-of-concept of voice analytics and speech-to-text technology to monitor sales calls in two business areas and make sure they they are not using sales tactics banned under financial services laws.

The proof-of-concept comes as the Australian Securities and Investments Commission (ASIC) continues to push institutions to come up with automation-driven solutions to clean up their compliance and governance act in the wake of scandals from the Royal Commission into banks.

Outbound call surveillance has been used for some years by banks in markets and institutional dealing rooms as an assurance measure, but it's recent leaps in artificial intelligence driven speech and tonality recognition mashed with cloud that's proved the tipping point.

That's because businesses using the sales surveillance technology can now afford to move from sampling just some to making call monitoring pervasive and persitant.

ASIC is hoping to use the same technology to review a larger percentage of recorded sales calls made by banks and insurers as part of its regular compliance checks to ensure the industry is not engaging in illegal high-pressure tactics to sell financial products.

The financial regulator has previously raised concerns at the high number of cancelled life insurance policies sold by phone, meaning customers were being sold products “they don’t want, can’t afford, or [that] don’t perform as they expected.”

At an ASIC-run voice analytics symposium in Melbourne yesterday, banks and insurers revealed their own progress in trialling or deploying similar technology for assurance and risk avoidance at their end.

NAB’s general manager for risk data and analytics Dominic Savage said the bank is closing in on a proof-of-concept.

“We're about to move into a proof-of-concept that's both across the Markets business to assist with surveillance there, but then also in the consumer lending sales within the call centre.

“We see a great opportunity in relation to the uplift of compliance rates.”

Savage said that without voice analytics technology, firms were limited to “sampling and listening to [recorded sales] calls at random because there's no way you can listen to every call in a call centre all the way through.”

Voice analytics provided NAB the chance “to move that scope to having 100 percent coverage” of recorded calls.

“If your goal is to have 100 percent assurance, the options [are either] this sort of technology or employing an army of people to listen to calls,” Savage said.

“[For the latter], it's got to be a pretty dull life. If you've got a mortgage sale, it could be a two hour phone call. You come into work at nine o'clock, and you listen to your first two hour call, and then you write it up for an hour and go to lunch, and then you come in the afternoon, and you do the same thing, and then you go home.

“Using little stories like that is a really good way of actually being able to get support around your business for these types of things where you paint a picture of what the options are.”

Savage said that NAB’s internal research on the use of voice analytics in the United Kingdom had identified benefits in being able to record and play back sales calls directly to the people that made them.

This, he believed, would smooth the path for having voice analytics analysing every outbound call placed by NAB to sell financial products.

“Some of the research we've done with companies using this in the UK is that the advocacy for the software has increased dramatically when staff can actually listen to themselves back,” he said.

“How about we let the people listen to themselves? People can then look at how have they spoken to a customer, or how they got a good outcome on a call or a good result on a survey.”

Savage said the technology also meant that internal staff that had previously been assigned to listen and check a sample of calls for compliance could now turn that task over to the software, and instead use topline results from the analytics to identify coaching opportunities for sales staff to improve internal culture as well as customer-focused results.

“We can free people up from having to do QA [quality assurance] to doing coaching,” he said.

“They can use this technology to identify behaviours and the way conversations flow that get to great outcomes.”

Savage didn’t see any limitations in the types of outbound sales engagements that voice analytics and speech-to-text might be used to analyse in the future.

“[Rather], the vision that I've been promoting internally - and indeed several others have as well - is that why can't we record everything?” he said.

“If you have a conversation with a customer, be it face-to-face, be it digitally, be it through a chat function, or if you're in a mobile sales role where you're in someone's house or at someone's business, why can't we record [it]?”

Based on NAB’s UK research, Savage believed customers would not object to having interactions recorded if it was pitched as a way to improve safety (by avoiding a situation where customers might be saddled with financial products they have no use for).

He noted that when recording of outbound calls was pitched only as a compliance measure, customers were less likely to agree to it - at least in the UK.

Savage said the use of regulatory technology or regtech at NAB - particularly the creations of startups - would likely only be hampered by general challenges the bank faced when procuring new products.

“Generally speaking with the large corporate organisations, it's not actually strictly speaking the procurement process which is the issue - it's getting everyone lined up that has to make the call across the different areas and different functions,” Savage said.

Looking out at a five-year horizon, he hoped to see industry progress in the adoption of voice analytics, though he noted five years was a relatively short period of time.

“I'd love to see ... voice analytics being used broadly across the industry, be it both from the industry participants, but also the regulators,” he said.

“I think that'll get us to a much better outcome and in five years time, I think we'll be hopefully sitting around here talking about the optimisation of that, our successes and our failures, and our trials and tribulations around how we're using that to drive the right culture.”