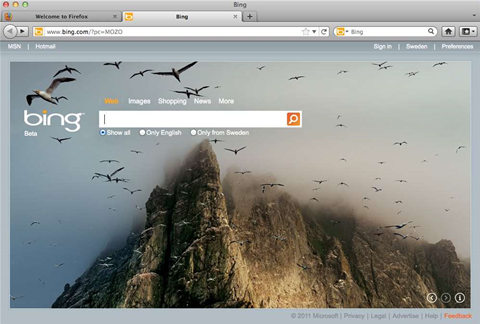 For Bing lovers and perhaps some non-Google revenue.

Mozilla on Wednesday released a version of its Firefox browser with Microsoft's Bing as the default search engine.

The ﻿Bing browser﻿ extends an agreement from last year which saw Microsoft's search engine introduced as an option.

The new browser also includes Bing as the default in the Firefox AwesomeBar, adjacent to the URL bar. Existing Firefox users can also download an add-on to make Bing the default.

Tighter alignment between Bing and Firefox could benefit Microsoft and Mozilla, given Google’s consistent 90 percent share of global search and Chrome’s growing popularity on the desktop.

Bing's share of search has fallen in the past few months from a Feburary high of 4.8 per cent to 3.7 per cent in October, according to Stat Counter figures.

Meanwhile Chrome’s worldwide desktop share has almost doubled in the past year, from 9 percent share to 16 percent in October 2011.

During that period Firefox has maintained a steady 22.5 to 23  percent share, while IE has fallen from 61 to 54 percent.

Most importantly for Mozilla, though, is that its search agreement with Google is set to expire in the coming weeks, ZDNet’s Larry Dignan points out.

The majority of Mozilla’s $123 million revenues in 2010 were derived from search agreements it has with Google, Bing, Yahoo, Yandex, Amazon and Ebay.