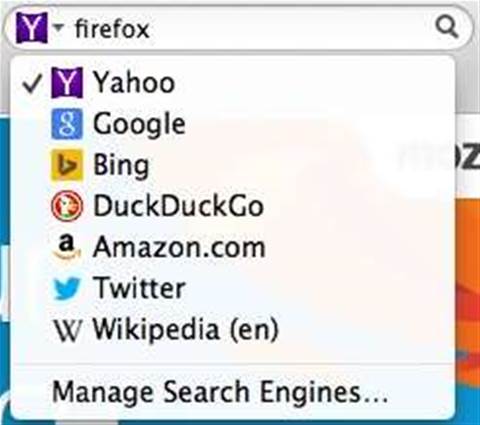 Google will no longer be the default search engine for the open source Firefox browser, after the Mozilla Corporation announced it had partnered with Yahoo for the next five years.

The new chief executive of the Mozilla Corporation, Chris Beard, yesterday revealed there would no longer be a single, global search provider for the browser. A range would be made available, he said, with Yahoo at the top of the list.

Google had been the default search engine in the Mozilla Firefox web browser since 2004. The agreement expired this year.

Beard hinted at friction between Mozilla and Google - which has gained a market share lead on Firefox with its Chrome web browser - saying "we took this opportunity to review our competitive strategy and explore our options".

Mayer said the partnership with Mozilla was the most significant for Yahoo in five years, and it would provide a long-term framework for future product integrations and international market expansion.

The Mozilla/Yahoo partnership will commence for United States users in December this year, with the rest of the world to follow in 2015.

Google, Microsoft Bing and the anonymising DuckDuckGo search engine will continue to be alternatives in Firefox.

However, for Russia, Firefox will default to the local Yandex search engine, and Baidu in China. Yahoo will not be offered in those countries.

Although browser usage statistics are imprecise due to factors such as user-agent spoofing, most sources peg Chrome as leading the pack with an almost 50 percent market share.

The once dominant Firefox has fallen out of favour with users and is now recording a below one-fifth market share, lower than Microsoft's Internet Explorer.