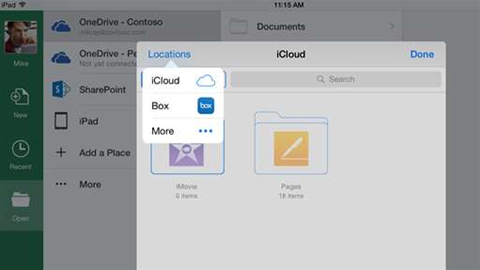 Windows 10, Android in the works.

The company last year announced a partnership with Dropbox to allow Office users to access and edit Dropbox files from within Office apps.

It today said any third-party storage provider would now work with Office for iOS, which previously only supported Microsoft's OneDrive.

New file-picker integration for viewing and editing means third-party cloud storage providers can integrate their services into the 'locations' picker within the Office for iOS apps. Users can then access and edit documents from these storage services, just as with Microsoft's OneDrive.

Microsoft also said it was working to bring similar integrations to Office on Android and Windows 10. It did not provide detail on timing.

Box, Citrix and Salesforce have already signed up to Microsoft's Office Online cloud storage partner program, the company wrote in its blog post.