Microsoft vs Google: you choose 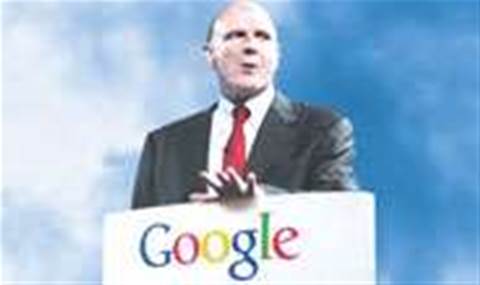 Ready to slug it out in the enterprise arena.

The past few weeks have seen the running battle between Microsoft, the world’s biggest software company, and Google, the world’s most successful internet company, move up a few notches.

On the very same day, Google trumped that launch with a big announcement of its own, the cloud-based collaboration system, Wave.

Ten days later the search giant tried to lay another glove on Microsoft with the launch of Google Apps Synch, which lets Google’s web email synchronise its calendar and contacts facilities with Microsoft’s Exchange email server.

Google is increasingly competing with Microsoft on a range of products relevant to IT leaders (see below).

Driving Google’s push against Microsoft is its belief that organisations will move to a cloud computing environment, and away from conventional PCs and servers.

But Clive Longbottom, research director at analyst Quocirca, said this is the early stages of the battle.

“It would be a brave or stupid IT department that said: ‘Let’s put everything onto a free cloud platform’,” he said.

One of the problems for Google trying to penetrate the enterprise market is that large firms tend to be fairly conservative and need to be reassured that Google could restrict outages ­ such as the one that occurred on 9 May when troubles were reported with search, Gmail and Google Docs systems, among others.

“There could be some difficult conversations with chief information officers who would prefer to go with a much more tried and tested application, perhaps not wanting to take up a new subscription model,” said Datamonitor senior analyst Vuk Trifkovic.

Longbottom added: “The big thing is that Microsoft is the incumbent, and it is difficult to bring down incumbents.”

Microsoft is working on a new platform as the basis for its cloud computing model. Dubbed Azure, the system promises to allow users to combine on-premises software with web-based applications, so minimising the impact of internet outages.

“When Azure becomes mature, Microsoft can then say it has Office applications delivered locally, and this is where Google can’t take them on,” said Longbottom.

“It will be a battle royal as soon as Azure gets to a level where Microsoft can really launch it, although you do get a Waiting for Godot feeling about Azure. But then, that’s the glory of being the incumbent.”

Another important factor in Microsoft’s favour is its well-established sales channels, through resellers and software developers, with all-important personal relationships with IT managers. Google has to rely on attracting customers direct.

“Google Apps is possibly an area where it could build up a channel, but it will take time and might only be a hundredth of the strength of Microsoft’s,” said Longbottom.

“Also, if the business model is predicated around advertising, in a market where lots of media firms are on the rocks, because of a lack of advertising ­ do I put my money into an advertising-dependent company like Google?”

The choice, as they say, is yours.

Email – Google Apps Sync allows IT managers to cut out Exchange, while users keep their familiar Outlook client as a front-end to Gmail. Apps Sync is available as part of the Google Apps Premier package, which is priced at $50 per year, per user.

Collaboration – Google Wave is an online collaboration and messaging platform currently only available to developers, but when fully released, could be a significant new tool for IT departments. Wave was designed, according to Google, to answer the question: “What would email look like if we invented it today?” Wave is likely to compete with Microsoft’s SharePoint software, especially if it can integrate with the rest of Google’s office applications and Gmail.

Internet browsing – Google launched Chrome last September to provide its own browser, which has been optimised for use with the firm’s online applications. Microsoft’s Internet Explorer browser already faces significant competition from Mozilla’s Firefox, which has been stealing market share, and earlier this month Google announced developer-only Mac and Linux versions of Chrome.

on documents. Although Microsoft has an online equivalent, Office Live, its PC productivity suite remains the clear market leader.

Got a news tip for our journalists? Share it with us anonymously here.
Copyright © 2010 Computing
Tags:
choose google microsoft software vs you
By Dave Bailey
Jun 20 2009
9:48AM