Microsoft releases Office for Mac, but only on cloud 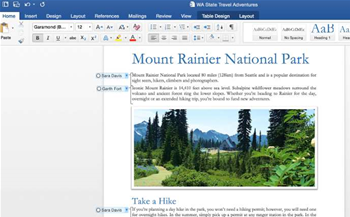 Microsoft has publicly released Office 2016 for Mac exclusively for Office 365 customers after receiving 100,000 pieces of feedback about the product during the recent preview period.

Office 2016 for Mac was put to public beta earlier this year.

The volume of feedback from Mac users resulted in seven updates to the popular productivity suite in just four months.

In a blog post, Microsoft Office client applications and services vice president Kirk Koenigsbauer said Office for Mac would still receive updates and enhancements "at least once per quarter".

Microsoft has previously highlighted its intention to provide the same user experience for Office 2016 across Mac and Windows.

Koenigsbauer said the productivity suite - which includes Word, Excel, PowerPoint, OneNote and Outlook for Mac - would feel familiar to users who have experienced it in Windows or iPad, but would still take advantage of Mac-specific capabilities.

Office 2016 was rebuilt to take advantage of new features in OS X including high-resolution retina displays and full-screen window support.

"It works the way you expect, with the familiar ribbon interface and powerful task panes. Mac users will appreciate the modernised Office experience and the integration of Mac capabilities like full screen view and multi-touch gestures," he said.

The product is only available today for Office 365 subscribers. The perpetual licence version will be available in September.

Got a news tip for our journalists? Share it with us anonymously here.
Copyright © CRN Australia. All rights reserved.
Tags:
macofficeoffice for mac 2016softwarewindows