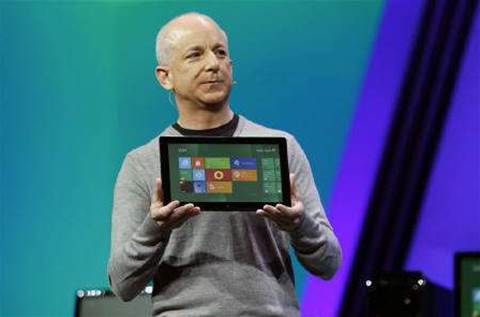 Free test version on Samsung hardware given away.

Microsoft handed out 5000 sleek Samsung tablet computers running a test version of Windows 8 at its annual developer conference on Tuesday, hoping to stoke excitement over its new operating system.

The devices, powered by Intel Core i5 chips, are the first chance for people outside Microsoft to play with Windows 8, the temporary code name for its next software system that includes features tailored for touchscreens and tablets.

The company is betting the new system will stem the tide of consumers switching to Apple's iPad.

Microsoft, whose software still runs more than 90 percent of personal computers, needs the new system to appeal to developers in the hope that they will create thousands of applications to attract users.

At the same time, it needs to lure a younger, tech-savvy audience and halt the march of Apple devices into Microsoft's business market, analysts said.

"Kids today are seeing more Apple logos than Microsoft logos, and Microsoft needs to change that if they are going to continue being the force that they have been," said Michael Silver, an analyst at tech research firm Gartner who was attending the developer conference.

"If you look at where Apple is successful, it's from consumers who have more power to bring in what they use at home to the business," Silver said. "That's important for Microsoft to go after, to get this fixed."

Tablet makers are expected to start selling products with Windows 8 by the middle of next year at the earliest.

The giant US software company also hopes to woo an applications development community that has already taken to Google's Android and Apple.

The new system boots up in seconds and features a home page filled with colorful tiles taking the user directly into applications such as Facebook, messaging or news feeds.

It is less likely to appeal to business users, analysts said, given that many companies are still working their way toward switching to Windows 7, released in 2009.

Microsoft has sold almost 450 million Windows 7 licenses in two years since it was introduced, but the newest version still accounts for less than one-third of global Windows users, many of whom are clinging to older versions.

The new system is the first to be compatible with low-power chips designed by ARM Holdings, which have become the standard for mobile devices.

Windows unit chief Steven Sinofsky said the new operating system is the first to focus on applications - it will contain an online app store for the first time - reflecting the way people now use computers, tablets and smartphones.

He said tablets running Windows 8 will be able to connect easily to printers, cameras and other devices. Windows 8 will also work on PCs with regular mouse and keyboard commands.

Sinofsky -- who called the free tablet distributed at the conference "not an iPad" -- emphasised it was a development machine only, and will not appear in stores. It features about 30 different apps written over the summer by Microsoft interns.

Analysts said Microsoft wants to get Windows 8 devices in stores for the "back-to-school" season next year, starting around July, or the holiday shopping season at the latest.

Microsoft itself has not set a schedule publicly for release of Windows 8.