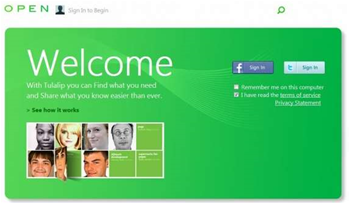 Interesting, but not a Google+, say Redmond gazers.

Microsoft could soon launch a social networking service called Tulalip, according to details it mistakenly published on its recently acquired domain, socl.com.

“With Tulalip you can find what you need and share what you know easier than ever,” read the page, captured by Fusible.com.

The series of profiles were laid out in tiles in similar fashion to its Windows Phone 7 interface.

Microsoft quickly replaced the details with a short “thanks for stopping by”, explaining that Socl.com was an "internal design project" from a team in Microsoft Research.

The leak was accidental, insisted Microsoft, and not part of a launch strategy to attract interest.

“We didn’t mean to, honest,” the new page states.

Microsoft reportedly acquired the domain name socl.com shortly after the launch of Google+.

Users would be able to authorise Microsoft's Tulalip app to sign-in to Twitter and Facebook, the leaked design suggested, putting it on par with other social media management applications such as Tweet Deck or Flipboard, rather than a full-scale social network.

Users would be able to authorise Tulalip to read Tweets, see who you follow and follow others, update a profile and post Tweets, according to Search Engine Land.

The experiment was also a Cloudapp.net application, which implied that it was hosted on Windows Azure, noted Microsoft watcher, Mary Jo Foley.

“I’m thinking that Tulalip is something much less ambitious than anything like a Google+ or Facebook,” she wrote.