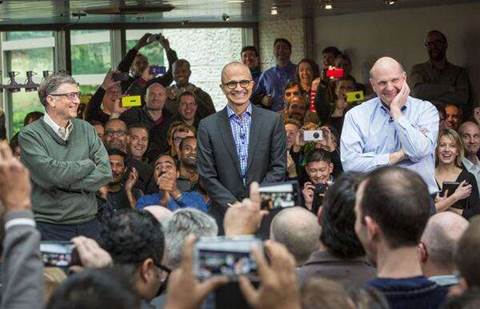 Much riding on relationship between new CEO, chairman and Gates.

Microsoft is betting a mix of old and young blood will revive the ageing technology pioneer, but new CEO Satya Nadella may find it tough to push change with co-founder Bill Gates and former CEO Steve Ballmer breathing down his neck.

The 46-year-old former enterprise business chief takes on the monumental task of exploring new directions - but with Gates as his consigliere, and on a strategy that Ballmer orchestrated with the board.

That uphill endeavor helped sour other candidates on the job, including proven change agent Alan Mulally at Ford, sources have said.

Gates is giving up the board chairmanship to fellow director John Thompson. That, plus Nadella's promotion, marks a changing of the guard at a 39-year-old company that fueled the PC revolution, but is struggling with its longer-term identity after missing the boat on the mobile computing revolution.

"You've got a triumvirate running the company: Satya as the new CEO, Bill as the product adviser and John Thompson running the board. A lot depends on how the three of them get along," said Bill George, Harvard Business School professor and former Medtronic CEO.

"The big question I have is, is Satya really going to be allowed to make the transformative changes that Microsoft needs to make, both at the product level and at the people level?"

Microsoft shares closed 0.4 percent lower at US$36.35 on the Nasdaq today.

The new Microsoft focuses on "devices and services" rather than licensing software, and seeks to emulate Apple's success in marrying popular online services with attractive gadgets.

Set by the retiring Ballmer last year, that vision has proven unpopular with investors hoping either that Microsoft will stop plowing billions into mobile devices - as it is doing with its Nokia acquisition - or come up with new products to take on mobile leaders Apple and Google.

"From a bigger-picture perspective, I don't think much is going to change," said Sid Parakh, an analyst at fund firm McAdams Wright Ragen. "The strategy that was put in place in 2013 is where the company is headed."

On Tuesday, Gates - who may again become a regular sight around Microsoft's Redmond campus after pledging to spend a third of his time as the new CEO's adviser - stressed that Nadella's cloud computing expertise qualified him to lead Microsoft into the new arena of mobile computing.

"Satya's got the right background to lead the company during this era," he said. "There's a challenge in mobile computing. There's an opportunity in the cloud."

Nadella got a rich pay rise on his promotion, with a salary of US$1.2 million, a maximum annual cash bonus of three times that and a stock award of US$13.2 million for next fiscal year.

That is much more than the moderately paid Ballmer, who took home less than US$1.3 million last year, chiefly because of his refusal to take stock awards, which he deemed unnecessary given his ownership of US$12 billion worth of Microsoft shares.

Nadella's pay is modest in comparison to tech superstar Marissa Mayer, who got a compensation package that could total more than US$70 million when she took the helm at Yahoo two years ago.

The online element may play to the strengths of Nadella, who led the creation of Microsoft's cloud services.

Nadella has pushed the company in the direction of an cloud-based future, using its network of vast data centres to host products such as Office 365, the subscription-based online version of its ubiquitous business software.

He "bashed heads together on the product teams to get them to support cloud deployment in a consistent way," said Ted Schadler, an analyst at tech research firm Forrester. "Every software company has to engineer this shift to software as a service, because 10 years from now there'll be no such thing as a licensed piece of software."

Nadella is only its third CEO in 39 years, taking over from Ballmer, who inherited the job from Gates in 2000. His appointment ends a five-month search process triggered by the August announcement of Ballmer's decision to retire.

That was longer than many investors had expected.

"It's a relief this process is over," said Daniel Ives, an analyst at FBR Capital Markets. "Many investors view it as the 'safe pick' as Mr. Nadella is a born-and-bred Redmond insider. But the uphill battle continues for Microsoft on its path to growth."

The move is also a significant shift for Gates, who along with Apple's Steve Jobs was one of the key forces who shaped the personal computer revolution of the late 20th century, making him an icon of the new information economy and the world's richest person in the process.

Gates, 58, left day-to-day work at Microsoft in 2008 to focus on philanthropy at his Bill & Melinda Gates Foundation, which he says is still his main job. He owns 4.3 percent of Microsoft's outstanding shares.

"Satya's asked me to step up, substantially increasing the time that I spend at the company," Gates said in a video statement. "I'll have over a third of my time available to meet with product groups. It'll be fun to define this next round of products, working together."

Nadella, who describes himself as a cricket and poetry lover, called the appointment "humbling" in an email to employees. In a videotaped statement, he said he would focus on "ruthlessly" removing any obstacles to innovation.

Most agree that Nadella's background makes him a safe pair of hands to take the company forward, but there remains a question over his ability to make Microsoft a hit with consumers or with impatient shareholders.

Even as Microsoft faces a slow erosion of its PC-centric Windows and Office franchises, some investors are campaigning for retrenchment and a bigger cut of the company's cash pile.

ValueAct Capital, which led a shareholder revolt last year that culminated in Ballmer's retirement, has pushed for the company to abandon ambitions to be a hardware maker, focus on its strengths with business software and return more capital.

That means refocusing on Office and Windows and distributing more of Microsoft's US$84 billion in cash and short-term investments, though most of that is held overseas.

Nadella's immediate task may be to balance the demands of long- and short-term investors.

"That's a balance that John Thompson is going to provide," said Parakh.