Microsoft finds its next 'CEO Steve' 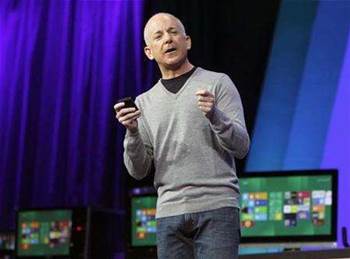 Why Sinofsky is firming as Ballmer's successor.

On that day, in Barcelona, Sinofsky will preside over the public test release of the Windows 8 operating system, the most important new version of Microsoft's cornerstone product in a decade.

Optimised for touch computing and low-power microprocessors, Windows 8 will run on tablets as well as desktops and laptops - and maybe even on phones in the future.

If it takes off, it could extend one of the most lucrative franchises in business history and restore some cachet to the fading Microsoft brand.

It could also propel Sinofsky to the top job at the company when CEO Steve Ballmer eventually steps down.

Frank Artale, managing director at Seattle-based venture capital firm Ignition, which was founded by a group of former Microsoft executives, said Sinofsky has both "the tech chops" and the "panache and showmanship" needed for the job.

Supporters credit Sinofsky with bringing order to the sometimes-chaotic software development process at Microsoft - partly by cutting layers of management through what is now referred to internally as "Sinofskyisation" - and getting products out the door.

Critics say he lacks the necessary charisma for the top job, and question whether he has the technical brilliance of Gates or the incisive analytical ability and forceful personality of Ballmer .

Most agree, though, that a strong performance for Windows 8 would all but make him the heir apparent.

The Mobile World Congress in Barcelona will be the biggest stage yet for Sinofsky, 46, who is largely unknown outside of tech circles.

Born in New York but raised in Florida, where his father ran a sports goods store, Sinofsky joined Microsoft as a software design engineer straight out of graduate school in 1989. He quickly caught the eye of then-chief executive Gates, who took him on as his technical assistant.

It was in that role that Sinofsky, while visiting his alma mater Cornell in early 1994, wrote to Gates to recount how the students and teachers had already come to see email and the Internet as "ubiquitous and expected as regular phone service."

Gates credits Sinofsky, and his contemporary J. Allard - the force behind the Xbox - for helping him to see the full extent of the Internet revolution.

Following his stint in Gates' office, Sinofsky was assigned to the Office team, which rivals Windows as the company's most profitable product. He was elevated to vice president in 1998, and after successfully driving the development of Office 2003 and Office 2007, he established a reputation as a "shipper," a high honor at the company which values getting finished products into the market more than anything else.

Despite his powerful position, Windows colleagues say Sinofsky - known by his internal e-mail handle as 'SteveSi' - still takes the time to reply to emails personally and is usually chatty in the hallways, though he may not always be the figure that people want to see coming the other way.

Meetings with Sinofsky can be tough, colleagues say, but he doesn't swear like Gates or scream like Ballmer.

Sinofsky has blogged at length about his management ideas, and even taught a management class at Harvard Business School. Some of his best blogs were used as the basis for a book called 'One Strategy: Organization, Planning, and Decision Making,' published by Wiley in 2010, which he co-authored with a Harvard academic.

Sinofsky stresses balancing what he calls "bottom-up" ideas from coders on the frontline with the "top-down" needs of managers who have to make sure the product matches the strategy.

"It's a bottom-up plan that is built and locked in a systematic way," said a former senior executive, who worked with Sinofsky in the Windows unit. "Everyone gets input on the plan, but once the plan is set, it's set."

Sinofsky is no longer involved in the day-to-day minutiae of coding: "My code was always nice and orderly, but I probably couldn't write enough code fast enough to really be the very best at programming," he wrote in 2005. But he has the knowledge needed to crack the whip on those who are.

"The techs know they can't sandbag him," said one current staffer in the Windows unit.

Sinofsky joined the Windows unit at the tail end of 2006, just after the ill-fated Vista was released to PC manufacturers and being prepared for its full public launch in January 2007. His first job was to develop a more ordered process for the next release. That work came to fruition three years later with Windows 7, which has now sold 525 million copies.

Sinofsky writes in his blog about cutting the number of managers between him and the lowest rung of the Windows unit to three or four from seven previously.

This streamlining, along with rigorous planning, has become his signature at Microsoft, but has ruffled some feathers at the company because it has reduced the number of general manager positions, where people got to use a wide variety of skills, and focused instead on the core functions of making software: developing, testing and managing specific programs.

But few dispute the results.

"For sure it flattens the organisation, it definitely eliminates fiefdoms," said the former Windows executive.

Artale, who led program management in the Windows unit in the 1990s while Sinofsky had the parallel role at the Office unit, added: "Steve is very much a product guy. He lives and breathes the product. He owns it. The product will reflect his personality and his style."

Physically and temperamentally, Sinofsky is almost the opposite of CEO Ballmer.

A trim 5' 8", usually sporting a tidy t-shirt and V-neck pullover, the balding Sinofsky steered clear of the limelight at this year's Consumer Electronics Show in Las Vegas, while the burly, effervescent Ballmer boomed his way through a series of press conferences.

Known for his love of roadside Americana, Sinofsky took time out to dine alone at the In-n-Out Burger on the other side of Interstate 15 from Las Vegas Boulevard and the hurly-burly of the show.

A former gym rat and jogger who now prefers yoga for exercise, Sinofsky lives in a condo in the historic center of downtown Seattle, unlike most Microsoft executives who favor large houses in the leafy suburbs east of Lake Washington, an easier drive to Microsoft's Redmond campus.

Public records show he donated $US10,000 to the campaign against a state tax on the wealthy in Washington state in 2010, alongside Ballmer who gave $US425,000. Gates, though, supported the tax, which had been proposed by his father.

Sinofsky's Microsoft shares are worth about $US35 million, according to regulatory filings.

Although not a natural performer, Sinofsky enjoys showing off his product. His perky unveiling of the first test version of Windows 8 last September showed he has a rapport with developers, even getting a laugh out of them by joking that Microsoft updates its 'Task Manager' program "every 15 years or so." But he isn't to everybody's taste.

"I don't think people care for his presentation style. He's one of those super-intelligent types that come off as a little dry," said Ryan Lowdermilk, who hosts a popular podcast for apps builders and attended the unveiling of Windows 8 to developers last year. "But developers respect people who ship product. That's what people like about him the most."

One-to-one, he is all business. Several reporters have received an icy, wordless glare when they ask a tough question.

Mini-Microsoft, the anonymous insider whose blog is a locus of informed criticism of the company, has called him "Spock-meets-Spartan."

In his 13th year as CEO, Ballmer has presided over huge growth in sales and profit, but he's had his critics from the day he started the job. Despite hitting four-year highs last week, the stock is still at the same level it was a decade ago, and Microsoft's market value is only just over half of Apple's.

The criticism reached a peak last May, when outspoken hedge fund manager David Einhorn - whose Greenlight Capital owned only about 0.1 percent of Microsoft shares at the time - said the company had a strong future but it was time for Ballmer to step down and "give someone else a chance."

Contacted on Monday, Einhorn declined to add to those remarks or to comment on Sinofsky.

A successful Windows 8 could help silence the critics. It would also give a big boost to Sinofsky.

Not everyone thinks he's is the right man for the job.

"Bill Gates had the most amazing mind I've ever encountered. You could show him a PowerPoint slide and he would ask why it was different from the one you showed him three years ago," said another former Microsoft executive. "Steve Ballmer is the most intuitively mathematical person I've ever worked with. Steve (Sinofsky) is neither of those things."

But unless Microsoft goes outside of the company for its next leader, which would be a surprise, Sinofsky dominates the field. Some feel the company should recognize that publicly, and be more clear about its succession planning.

"Sinofsky is an executor, he can deliver," said one large institutional shareholder. "They (Microsoft) should be able to provide more transparency to the depth of bench - to demystify the inner circle of management. In the absence of providing that, you get non-productive chatter. It would serve them well to nip that in the bud."