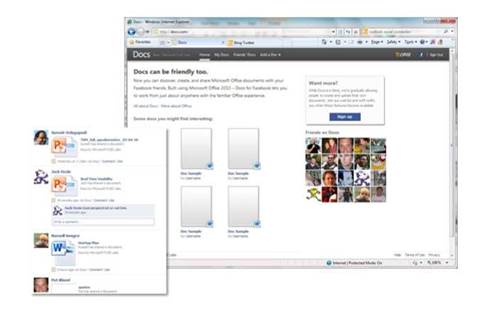 Facebook and Microsoft have announced a deal which will let the social networking site's users collaborate on creating documents online using the online version of Office 2010.

The Facebook for Docs application, announced by Mark Zuckerberg at the F8 developer's conference in San Francisco, is still in beta and uses can currently view documents but will have to join a waiting list to access the full service, which was developed by Microsoft's FUSE labs.

“Microsoft is announcing Docs.com today. It's an online version of their Office suite that makes it easy to share and collaborate with your friends online,” said Zuckerberg.

“One of your friends can create a document and share it with you and it's really easy and goes to your inbox. It's all of the power of Microsoft Office suite online with a simple Facebook integration.”

“For now we exchange Word docs, PowerPoint and Excel and you can either offer those in your rich client if you have Office and if you don't have Office you can use the web apps to offer those online,” said Lili Cheng, general manager of Microsoft's FUSE labs.

The move will be a blow to Google's own online services, with the company looking to extend the use of its cloud services in the same area, but hardly a surprise. Microsoft is a shareholder in Facebook after investing US$240 million in the company in 2007.