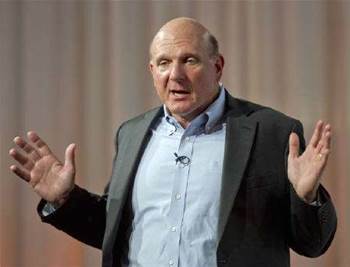 Microsoft CEO Steve Ballmer failed to clinch his maximum bonus for the second year running due to the company's slow progress in mobile phones and adapting to the tablet computer revolution.

Ballmer, 55, got a bonus of $US682,500 for the latest fiscal year, matching his annual salary, according to a filing with securities regulators on Monday.

Under his bonus scheme, he was eligible to receive between zero and double his salary.

The long-time CEO, who took over from Bill Gates in 2000, has been a lightning rod for criticism of the former technology leader's static share price.

One prominent shareholder called for his ouster this year, but he shows no signs of stepping down.

Last year, Ballmer also received a bonus equalling his salary, and was faulted for the failure of the Kin phone and keeping up with new forms of computing.

It also pointed to a 2 percent dip in sales at its key Windows unit, which was in line with global personal computer sales, but also shows that Apple's tablet is starting to eat away at the core PC market.

Microsoft is not expected to enter the tablet market in earnest until next year, when it releases its next operating system, codenamed Windows 8.

In Ballmer's favour, the company's compensation committee recognised his success in launching the Kinect hands-free gaming system for Xbox and the online Office 365 product, while building up the Azure cloud computing platform and Bing search engine.

It also mentioned his work towards the purchase of online chat company Skype, which has not yet been completed, and partnerships with Facebook and phone maker Nokia.

Ballmer has long requested that he receive no stock compensation, which might otherwise boost his pay packet.

He already owns 3.95 percent of the company's shares and is the 33rd richest person in the world with a fortune of $US14.5 billion, according to Forbes.

Overall, Ballmer's compensation rose only about 2 percent from last year to $US1.38 million, making him one of the lowest-paid leaders of a major US company.

Microsoft's filing pegs Ballmer's maximum possible compensation -- if he had received twice his salary in bonus -- at about $US2 million, compared to an average of $US15.8 million for CEOs of peer companies.

In the filing, Microsoft said its board believes Ballmer is "underpaid for his role and performance," but accepted his request to receive no stock.

Ballmer's small pay rise comes as the company increases its sales, but is struggling to keep pace with the innovation of Apple, which is now bigger in terms of sales, profit and market value.

In May, Microsoft's old foe IBM also surpassed its market value for the first time since 1996.

During Microsoft's last fiscal year, its sales rose 12 percent to almost $US70 billion and its operating profit rose 13 percent to $US27 billion, helped by strong performance from its Office unit.

Microsoft's shares gained 13 percent in that time, compared to a 31 percent gain in the tech-heavy Nasdaq, but have retreated since.

The stock closed at $US24.53 on the Nasdaq on Monday, around the same level as a decade ago.