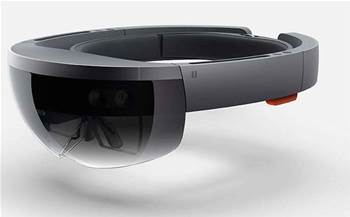 Microsoft has opened up its HoloLens headset for pre-order to Australian developers and commercial customers as part of a global expansion of the device.

The augmented reality headsets will begin shipping in November, costing $4369 for the development edition and $7269 for the commercial suite edition.

The device displays holographic images on a pair of translucent lenses and allows users to interact with those holograms in the real world. HoloLens developer kits went on sale in the US in March and companies like NASA, Airbus and Audi are using the technology commercially.

While vendors like Facebook, Samsung, HTC and Sony have chosen to develop virtual reality headsets, Microsoft made the choice to work on an augmented reality device instead. In January 2015, Microsoft revealed HoloLens for the first time, calling the device a holographic PC running Windows 10, rather than an accessory.

It pitted Microsoft against Google and its Glass headset, which first debuted in 2012.

Google Glass has since faded into obscurity, with consumer sales ceasing in 2015 and all social media accounts related to the device going dark.

Got a news tip for our journalists? Share it with us anonymously here.
Copyright © CRN Australia. All rights reserved.
Tags:
augmented realityhardwarehololensmicrosoft