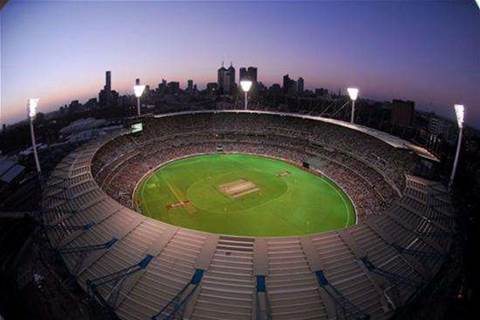 Latest tool in fight on fun.

Security guards at the Melbourne Cricket Ground are deploying internet-protocol based security cameras and iPhones in an effort to crack down on any raucous behaviour by the English 'Barmy Army' and Australian cricket fans this summer.

The iconic stadium plans to spend $3 million over the next five years replacing a fleet of analogue cameras with IP security cameras, whilst deploying iPhones to security guards in the field and installing facial recognition technology at entry points to the stadium.

Fifteen percent of the stadium's 480 analogue cameras have already been replaced by HD digital models, purchased from Axis Communications, according to security and venue support manager Andy Frances.

Another 50 will be deployed in the coming weeks and the remainder replaced as older models reach end of life.

Security staff monitoring crowd behaviour in the MCG's control room [see photo gallery, right] have been provided touch-screen technology underpinned by Genetec security software, which allows staff to focus on a given area of the stadium by touching an area of the screen.

The stadium plans to integrate this IP-based monitoring system with iPhones and iPads.

Plans are afoot to deploy fifteen iPhones to security staff in time for this summer's cricket season, when the vocal Barmy Army travel to Australia to support the England cricket team's Ashes campaign.

The devices could support police in crowd evictions or even help find lost children, Frances said.

"In a 20/20 game of cricket, when we get a lot of evictions, if we want to evict someone in the middle of a bay, and I say the bloke in green and gold, I've just described the whole bay," Frances told iTnews.

"But if you can say the bloke's six rows back and by the way, here's what he did and here's the vision of it, you can pick him out. And when [the security guard] goes over to hand the bloke to the police, they can show [the footage] to the police on the spot on the iPhone."

Frances said the project is "very progressive" by industry standards.

"Once we get close to getting it right, I think we're probably four to five years ahead of most stadiums."

The MCG is also exploring the use of facial recognition technology - installing high mega-pixel, fixed cameras at stadium entry points to track banned patrons, stolen tickets, and even prepare for the possibility of terrorism.

"If banned patrons and they were coming through you could put their picture in and the system would immediately warn us if they tried to enter," Frances said.

Frances said it will be a couple of years before facial recognition technology is reliable and affordable.

"It's very expensive at the moment." he said. "One camera goes to one PC and requires one software technician. So if you worked that out - for 100 cameras you'd need 100 PCs and 100 technicians.

"It's not feasible yet for us to put it in, but in a couple of years it should start to get reliable."