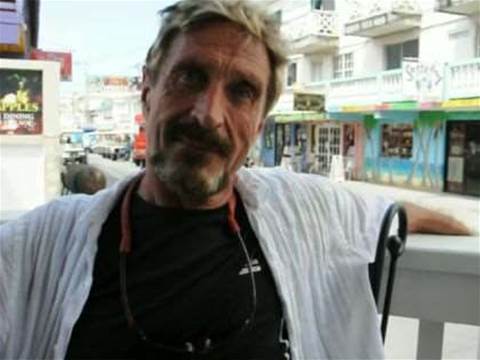 Says authorities will kill him.

John McAfee, who founded his namesake anti-virus company in 1989, is on the run in Belize, where he is wanted by police in connection with a murder.

But the 67-year-old claims he's innocent, according to a Wired report.

Gizmodo first reported the story on Monday, posting an official statement from Belize police on the murder of McAfee's neighbor Gregory Faull, 52, an American expatriate who was shot to death on Saturday night in his San Pedro home.

McAfee has lived in retirement in Central America since 2008. A pioneer in anti-virus software, he founded the Santa Clara, Calif.-based security giant, which was originally called McAfee Associates, later selling his stake in the company.

Before he died, Faull and McAfee, 67, often butted heads, Gizmodo reported, with an incident as soon as last Wednesday occurring between them.

“Faull filed a formal complaint against McAfee with the mayor's office, asserting that McAfee had fired off guns and exhibited ‘roguish behavior,'” the article said. “Their final disagreement apparently involved dogs.”

According to the police report, Faull was found by his housekeeper with a gunshot wound to his head.

Wired's Joshua Davis has been regularly speaking to McAfee, who maintains that he is innocent and knew “nothing” of Faull's shooting – other than the fact that it happened.

McAfee also said that he would not willingly talk to Belize police, as he believed they would kill him.

“They've been trying to get me for months,” he told Wired. “They want to silence me. I am not well liked by the prime minister. I am just a thorn in everybody's side.”

Despite being on the run, McAfee said he doesn't plan to leave the country.

Got a news tip for our journalists? Share it with us anonymously here.
Copyright © SC Magazine, US edition
Tags:
mcafee security
By Danielle Walker
Nov 14 2012
10:05AM