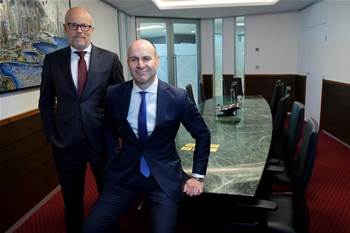 Two of Australia’s most high-profile IT executives have joined forces to form the nation's largest dedicated cyber security company, a move that directly challenges the dominance of large US-affiliated vendors in securing key contracts with major corporates and government.

CyberCX, which is backed by private equity firm BGH Capital, will bring together 12 of the country’s leading independent cyber firms under the one umbrella.

The firms are Alcorn, Assurance, Asterisk, CQR, Diamond, Enosys, Klein&Co., Phriendly Phishing, Sense of Security, Shearwater, TSS and YellIT, though more are expected to join in the future.

The “full-service cyber security company” will be led by former Optus Business managing director John Paitaridis, who left the telco after seven years in March to lead BGH Capital’s IT arm.

In a major coup in terms of securing staff with national security and public sector kudos, Paitaridis will be joined by former national cyber security advisor Alastair MacGibbon, who will take up the “critical” role of chief strategy officer.

MacGibbon resigned to return to the private sector in May after three years as the federal government’s cyber tsar.

While the transactions are still subject to regulatory approvals, the undisclosed investment by BGH Capital is reportedly the “largest private security investment in cyber security in the country”.

Paitaridis, who is behind CyberCX’s vision, said the company had been created at time when a “rapid increase” in threats was creating “unprecedented risk and exposure” for both businesses and government agencies.

“Cyber security risk should be a number one priority for business owners, senior executives and board directors as organisations increasingly embrace digital connected technologies,” he said.

“It is clear that many businesses, enterprises and government organisations are not yet well enough advised, supported or equipped to defend their mission critical assets.”

Paitaridis said a “consultative end-to-end approach” from an independent cyber security partner was needed to address these risks.

“A partner who is independent, understands the intersection between risk and technology, and has the expertise, scale and know-how to confront any cyber threat,” he said.

CyberCX’s workforce will initially number more than 400 cyber security specialists, with offices based in in Sydney, Melbourne, Brisbane, Canberra, Adelaide and Perth.

Additional offices are also planned at a later date to expand the company’s national footprint.

The company promises expects to become “most comprehensive cyber capability in Australia” by offering the full spectrum of services.

These include consultation and advisory, risk and compliance, security assurance, integration and engineering, training and education, incident response and digital forensics and managed security services.