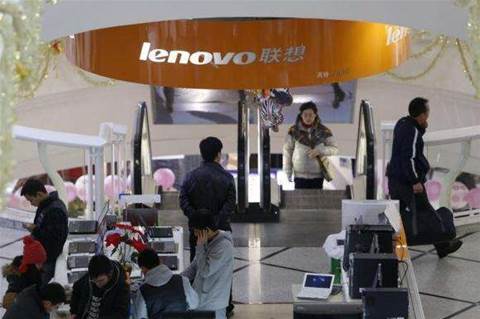 People stand under a sign showing the Lenovo company at a computer market in Shanghai January 21, 2014. CREDIT: REUTERS/ALY SONG

Chinese PC maker Lenovo Group agreed to buy IBM's low-end server business for US$2.3 billion ($2.6 billion) in what is set to be China's biggest technology deal.

The long-awaited acquisition comes nearly a decade after Lenovo bought IBM's loss-making ThinkPad business for US$1.75 billion, eventually becoming the world leader in personal computers in 2012.

The sale of the low-end server operation — which still needs US government approval — would allow IBM to focus on its decade-long shift to more profitable software and services.

For Lenovo, the deal would increase its market share in the server market to 14 percent from 2 percent, said Peter Hortensius, senior vice-president at Lenovo and president of its Think Business Group.

The deal still needs clearance from the Committee on Foreign Investment in the United States (CFIUS), a body charged with protecting US national security interests.

Chinese companies faced the most scrutiny over their US acquisitions in 2012, according to a CFIUS report issued in December.

Lenovo's purchase of IBM's notebook division faced similar scrutiny before getting the go-ahead.

This time is likely to be easier, analysts said.

"It's fair to say that this deal is more likely to get through CFIUS without major problems than the 2005 transaction," said John Reynolds, a partner at law firm Davis Polk & Wardwell in Washington, DC who has 20 years of experience dealing with CFIUS.

Reynolds said there seemed to be relatively little national security risk in the deal, adding that Lenovo was now a fairly well-known corporate citizen compared with 2005.

ISI Group analyst Brian Marshall also said he did not anticipate significant regulatory hurdles in the United States or China. "...Our seasoned China analyst believes the Chinese government is likely pleased with the deal," he added.

Maybank Kim Eng analyst Warren Lau noted that the System X server, among the systems to be bought by Lenovo, is based on commoditised technology and components that are sourced from the United States.

IBM shares were slightly higher in early trading on Thursday. Trading in Lenovo shares was halted before the close in Hong Kong ahead of the announcement.

The deal with Lenovo marks another step in IBM's switch away from hardware to software and services.

IBM said this month it would spend more than US$1.2 billion to build up to 15 data centres on five continents to expand its cloud services and reach new clients and markets.

The company also said it would invest more than US$1 billion to establish a new business unit for Watson — the supercomputer system that beat humans on the TV quiz show "Jeopardy" — to offer the cloud services to businesses and consumers.

With Lenovo's PC business under siege from powerful smartphones and super-fast tablets, the company is diversifying its revenue and remodelling itself as a force in mobile devices and data storage servers.

Lenovo would have its work cut out for it to turn around the server unit, however. IBM's low-margin server business has posted seven quarters of losses as more clients switch to cloud storage from traditional infrastructure.

"To generate costs synergy, Lenovo will need to move most of the manufacturing from IBM's existing facility in Virginia to Asia while keeping some R&D in the US," Lau said.

The server business being sold by IBM, which produced low-cost x86 servers, competes with HP and Dell but lags both in market share.

IBM dominates the higher-end server market with a 57 percent market-share, according to research firm Canalys.

IBM will retain its higher-margin server systems and will continue to develop software and applications for the x86 platform.

Following closure of the deal, Lenovo will offer jobs to 7500 IBM employees around the world and assume customer service and maintenance operations.

"We will do a variety of things — improve products, drive improved costs, and couple it with the scale we have and our PC business to improve go-to-market," Hortensius said.

Analysts said Lenovo would likely find it easier than IBM to sell the x86 servers to Chinese companies as Beijing tries to localise its IT purchases in the wake of revelations about widespread US electronic snooping.

ISI's Marshall said the deal, if approved, would put more pressure on the server market as Lenovo may be less disciplined on pricing than IBM as tries to build market share.

Lenovo said it expected demand for computing power and recovery of global enterprise spending to further drive growth in the x86 server market.

Lenovo has agreed to pay US$2.07 billion in cash and the rest with stock of the Hong Kong-listed PC maker.

The deal surpasses Baidu's US$1.85 billion acquisition of 91 Wireless from NetDragon Websoft last year, according to Thomson Reuters data, and underscores the growing clout of China's technology firms as they look to expand overseas.

Talks between IBM and Lenovo fell apart last year due to differences over pricing, with media reports at the time suggesting IBM wanted as much as US$6 billion for the unit.

Analysts said the sale may have been accelerated by IBM's problems in China following revelations of US electronic spying and ongoing weakness in hardware sales.

Lenovo's purchase of IBM's PC business in 2005 became the springboard for its leap to the top of global PC maker rankings, and the market is betting Lenovo will enjoy similar success with its latest acquisition, which is partly reflected in a 9.44 percent rise in its shares this year.

IBM's server business is the world's second-largest, with a 22.9 percent share of the US$12.3 billion market in the third quarter of 2013, according to technology research firm Gartner.

HP is the biggest player, while Lenovo does not appear in the top five.

"The acquisition presents a unique opportunity for the company to gain immediate scale and credibility in this market," Lenovo said in a statement on Thursday.

Lenovo said it was advised by Credit Suisse and Goldman Sachs Group.